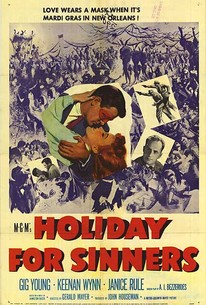 This minor MGM feature stars Gig Young, Janice Rule, Keenan Wynn and Richard Anderson as diverse individuals caught up in New Orleans' Mardi Gras celebration. Young is cast in the leading role as a doctor, whose plans for the celebration are altered when punch drunk prizefighter Wynn commits murder. The killing completely changes the course of Young's life, and effects the lives of those closest to him. Though it didn't cost much, Holiday for Sinners suffered the fate of many second features produced during the early TV years and failed to make back its budget. Gig Young would have to wait several years for full stardom--and then usually as comedy relief for bigger stars. ~ Hal Erickson, Rovi

Will Wright
as Man with Cigar

Critic Reviews for Holiday for Sinners

There are no critic reviews yet for Holiday for Sinners. Keep checking Rotten Tomatoes for updates!

There are no featured reviews for Holiday for Sinners at this time.