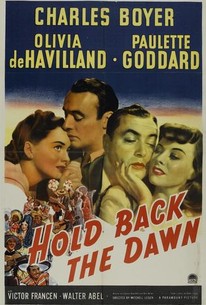 Hold Back the Dawn Photos

Hold Back the Dawn begins with a shabby immigrant (Charles Boyer) wandering onto a Paramount sound stage and telling his life story to director Mitchell Leisen (who actually directed this film). In flashback, we see that Boyer was once a conscienceless gigolo, desperate to flee Nazi-occupied Europe. He makes it to Mexico, where he pretends to fall in love with shy schoolteacher Olivia de Havilland. It is his plan to marry her, thus be able to enter the United States; then he intends to dump her and pursue the woman he really loves. Boyer's regeneration, and the price he pays for his previous callousness, brings Hold Back the Dawn to its tearful conclusion.

Critic Reviews for Hold Back the Dawn

You will enjoy it as a straight-away romance, crowded with most engaging characters and smoking with Mr. Boyer's charm.

While Hold Back the Dawn is basically another European refugee yarn, scenarists Charles Brackett and Billy Wilder exercised some ingenuity and imagination and Ketty Frings' original emerges as fine celluloidia.

This romantic weepie is both moving and effectively stylish.

A top-drawer melodrama that's only hampered by a rocky start and a rushed finale.

A wonderful film which confounds expectations again and again.

A touching and memorable film, this brilliant romance offers evocative performances by Boyer and de Havilland.

Audience Reviews for Hold Back the Dawn

Lovely drama with some really beautiful acting particularly from Olivia de Havilland. You catch a quick glimpse of an absolutely beautiful Veronica Lake, peekaboo bang firmly in place, filming a scene for her breakthrough movie I Wanted Wings at the very beginning of the film. She shimmers like the sun in her brief seconds on scene.

Charles Boyer is very good in this moving melodrama. I think he gets overlooked as an actor sometimes. Nice to see Olivia de Havilland sans hoop dress. Worth tracking down, TCM shows occasionally.

a superior melodrama way under the radar. charles boyer is highly effective as a gigolo hoping to enter the u.s. by marrying a citizen. enter innocent schoolteacher olivia de havilland. paulette godard is fun as boyer's partner in crime, but their cynical plans soon go awry. most of the film takes place in mexico with lots of local color

Hold Back the Dawn Quotes