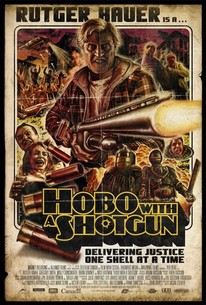 Critics Consensus: It certainly isn't subtle -- or even terribly smart -- but as a gleefully gory homage to low-budget exploitation thrillers, Hobo with a Shotgun packs plenty of firepower.

Critics Consensus: It certainly isn't subtle -- or even terribly smart -- but as a gleefully gory homage to low-budget exploitation thrillers, Hobo with a Shotgun packs plenty of firepower.

Critic Consensus: It certainly isn't subtle -- or even terribly smart -- but as a gleefully gory homage to low-budget exploitation thrillers, Hobo with a Shotgun packs plenty of firepower.

Hobo With a Shotgun Photos

A train rolls into its final stop. From one of the freight cars jumps a weary-eyed transient with dreams of a fresh start in a new town. Instead, he lands smack-dab in the middle of an urban hellhole, a place where the cops are crooked and the underprivileged masses are treated like insignificant animals. This is a city where crime reigns supreme, and the man pulling the strings is known only as "The Drake." Along with his two cold-blooded and sadistic sons, Ivan and Slick, he rules with an iron fist, and nobody dares fuck with The Drake, especially not some hobo. Director Jason Eisener's blood-soaked return to the Sundance Film Festival is more than just a nod to the grindhouse flicks of the 1970s and '80s; he ups the ante in a major way, and Rutger Hauer's performance is a legendary display of brutal ass-kicking and meticulous name-taking that is not to be missed. -- (C) Magnet

Brian Downey
as The Drake

News & Interviews for Hobo With a Shotgun

View All Hobo With a Shotgun News

Critic Reviews for Hobo With a Shotgun

It stomps over any notions of good taste and credibility after roughly five minutes.

Fans of the genre will relish the ironies (or, as it's known in the trade, the chance to have your cake and eat it).

I've got to admit there are flashes of demented brilliance in this hardcore crassploitation splatter pic.

Jason Eisener's Hobo with a Shotgun is trash with a difference: designer trash.

Provides its target audience with exactly what they want while still managing to be aware of just how silly it all is.

There are two kinds of people in the world, people who will watch a movie called Hobo With A Shotgun, and people who will avoid it at all costs. I fall in the former category, and if you do too, I have to believe that you will fall in love.

I'm happy to see Hauer is still blowing folks away but I really do hope that the rest of the actors in this film never, ever work in front of the camera again.

Some may argue that Hobo with a Shotgun encapsulates a joke worn thin, but the B-movie energy that pulses through the veins of this beast is not to be denied.

Hobo With A Shotgun is as likely to please Quentin Tarantino fans as it is to offend everyone else, with scenes of elaborate decapitations and scantily clad women writhing in the ensuing blood spatter.

It's clear Eisener has an eye for the schlock genre and, by letting his imagination run wild, Hobo with a Shotgun emerges as a sure-to-be perennial, shockingly violent and wonderfully clever yet purposely screwball modern-day vigilante thriller.

... a blood-spattered love letter to the grindhouse vengeance movie by first-time filmmakers who, as Spinal Tap might put it, crank everything up to 11.

Audience Reviews for Hobo With a Shotgun

Pretty fucked up. But then again, it's got Rutger Hauer so I'm not complaining.

Dear God. This movie.....as far as contemporary grindhouse films (and homages to them go), this is one of the better ones. It's also one of the sickest, most violent, and disturbing films I've seen in quite a while, perhaps ever. It's also really entertaining, sometimes quite fun, and actually pretty well made for what it is. It's a solid B movie, and that's also the grade it gets (for now). The story is pretty basic and concerns a nameless hobo who rides the rails into the ironically named city of Hopetown- an urban wasteland overrun by corruption, vileness, and degradation. He takes it upon himself to clean up the place using vigilante justice, with a shotgun as his primary tool. Rutger Hauer gives a solid performance as the Hobo, and actually delivers delivers some monologues that help elevate the film from being purely a trashy exploitation fest. Molly Dunsworth makes her film debut as a hooker with a heart of gold who teams up with the hobo after they help one another out. Brian Downey, Gregory Smith, and Nick Bateman all chew the scenery superbly as the megalomaniacial kingpin and two equally sick sons who all control the city. Despite being absolutely sick and disgusting ,the effects are really well done, hence their effectiveness. All of the violence is ridiculous and over the top (and almost non stop), but while most of it is supposed to be lighter in tone, some of it actually does become truly sick and disturbing tonally. Even then though, there's a lot of inventiveness to the kills, featuring some stuff I've never seen before, but kinda liked. The film overall is very stylish, featuring all kinds of garish lighting, a mish mash of various styles, and some truly odd set pieces (such as a twisted take on the Last Supper). This film knows what it is, and isn't trying to be high art. There's a bit of room for some subtext, and you wouldn't have to do a whole lot of reaching to make your case in that regard. This is mostly just supposed to be a demented homage to trashy 70s exploitation flicks, and in that regard, it is highly successful, and not only that, but it firmly earns its place amongst the films it is paying tribute to. If you are going to see this, and you should (at least once), just be prepared for some really messed up violence, revolting gore, and perhaps have a few drinks before hand.

It takes a little time to understand what "Hobo With a Shotgun" is trying to do, but once it clicks, it becomes apparent that this is a brilliantly executed homage to a very peculiar period in pop culture history.

Intentionally trashy, gritty, and ultra-violent, this piece of exploitation homage is as good as anyone could expect from a movie titled 'Hobo With a Shotgun'. This movie was originally a fake trailer in 'Grindhouse' and it is very much a 70's style exploitation film (even down to being filmed in Technicolor). Rutgar Haur plays the Hobo and his un-ironic serious performance is a nice offset to the film's over-the-top villains. The plot is very simple with the title character taking the law into his own hands and delivering vigilante justice to a crime-ridden city. However, that's is also the problem. The story is so simple that the characters don't get much depth and end up being forgettably one-dimensional with the exception of the Hobo. Plus the film's abundance of gore and violence can get a little un-settling at times. Recommended strictly to exploitation fanatics.

Hobo With a Shotgun Quotes