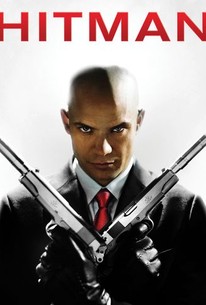 Based on the top-selling, award-winning videogame franchise, the "Hitman" is a genetically-engineered, elite assassin known only as Agent 47. His hallmarks are a lethal grace, unwavering precision, and resolute pride in his work. But even 47 couldn't anticipate a "random equation" in his life of exactitude: the unexpected stirrings of his conscience and the unfamiliar emotions aroused in him by a mysterious Russian woman. Agent 47 is a mysterious and complex man of profound contradictions: He was bred from the world's deadliest criminals, but raised by an exiled brotherhood of the Church. His very existence seems to be a sin, but he wages a quiet war to rid the world of evil. He's brilliant, charismatic and charming--yet reveals little about himself, has no name and is known only by the last two digits of a barcode tattooed on the back of his head.

Jean-Marc Bellu
as Hitman No. 2

Nicky Naude
as Hitman No. 3

Abdou Sagna
as Hitman No. 4

Ilya Nikitenko
as Hitman No. 5

Ancuta Radici
as The Sad Girl

Patrick Ligardes
as Another Buyer

Velizar Nikolaev Binev
as The Priest

The title is probably misspelt -- there should be an S in front.

As far as it being a video game, I was in the theater and I was trying to work the remote control to close the curtains and turn the sound down.

The film's target audience - dummies everywhere - will be blown away.

It's based on a computer game, Hitman (see what they did with that title?), though even when it reaches maximum velocity, it's still panting behind The Bourne Ultimatum for style and excitement.

Rubbish, of course, but some teenage boys love this stuff. Don't rule out sequels.

Perfectly good action set pieces and fights, but everything in between is either dull, cliché, or a dull cliché. Not the worst action film you'll see, but far from the best...

The question winks at us throughout the film: who really is the hunter and who is the hunted?

Bloody and entertaining, Hitman is superior to the average adaptation of a video game, which in itself, is worthy of celebration. [Full review in Spanish]

Hitman the film is a conventional action thriller that seeks to do nothing more than entertain with an assortment of carnage and sex, at which it is moderately successful.

This is an enjoyable action film with plenty of cool action sequences, shoot-outs and chases. It's based on the series of popular video games and stays quite true to parts of the games. The way the missions are relayed, location, suit, outfit changes and even some of the tactics used in the game are shown in the film. So this should keep the games fans happy. For everyone else this is just a cool stylized action film, which reminded me of the Transporter films quite a bit.

Hey, it's another girl with a dragon tattoo! What are the chances? Don't you think the bald heads with the barcodes shown off to the world are a bit obvious. All you need is one person to figure it out and this whole gang would be wiped out pronto.

Pretty ridiculous -- although I did like the bit about the kids actually playing the video game in the hotel room. Some nice action, some poor story. Walter, if you're in the mood for a little intense killing, I'd check this one out.

I liked this far more than i should have.