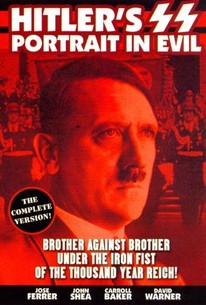 The two-part TV movie Hitler's SS: Portrait in Evil crystallizes that evil by concentrating on two Berlin brothers. In 1931, Helmut Hoffman (Bill Nighy) a brilliant student and self-styled opportunist, joins Hitler's SS. At the same time, his younger brother Karl (John Shea), a top athlete and idealist, becomes a chauffeur for the "S.A." (storm troopers). When the SS topples the SA from power, Karl ends up in Dachau. He is rescued through his brother's influence--if you can describe sending Karl to fight on the Russian Front a "rescue." As he watches the Third Reich deteriorate, Helmut at long last suffers pangs of conscience. As if the story of the rise of Nazism needed any further melodrama, Hitler's SS shoehorns in a romantic triangle involving Karl, Helmut, and beautiful nightclub-singer Lucy Gutteridge. The all-star supporting cast of Hitler's SS includes Carroll Baker as the Hoffman brothers' anguished mother; Tony Randall as an androgynous entertainer named Putzi (shades of Cabaret's Joel Grey); and David Warner, repeating his Holocaust role as SS head man Heydrich.

Tony Randall
as Putzi (the comedian)

It never rises above a flatness, to remain only a routine telling of familiar historical events.

There are no featured audience reviews yet. Click the link below to see what others say about Hitler's SS: Portrait in Evil!