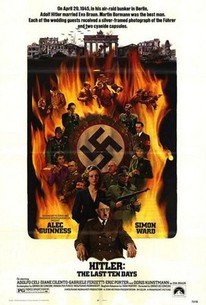 Alec Guinness plays against stereotype, imbuing his Adolf Hitler with an introverted solemnity in Ennio De Concini's Hitler: The Last Ten Days. Set almost entirely inside Hitler's Berlin bunker, the film chronicles the dying days of the Third Reich as the Allied armies close in on Berlin. Guinness's Hitler is an enclosed depressive who sinks slowly into madness, depression, and ultimately suicide as his 1,000-Year Reich collapses around him.

Richard Fescud
as Von Below

[Hitler: The Last Ten Days] offers neither instruction nor entertainment.

There are no featured audience reviews yet. Click the link below to see what others say about Hitler: The Last Ten Days!