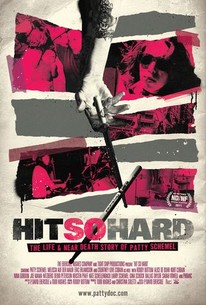 As grunge took off, the music industry was completely transformed in a way nobody expected... especially the young musicians who went from tiny shared Seattle apartments to international superstardom, sometimes overnight. Some handled it well... and some did not. As the acclaimed drummer of Courtney Love's seminal rock band Hole, Patty Schemel was right in the middle of all of it. The openly gay woman who always felt "different" never dreamed she would be part of a multi-platinum selling band, touring with legends, or on the cover of Rolling Stone. Or that, thanks to drug addiction, she could lose it all. Hit So Hard tells the story of Patty's rise to fame (and nearly fatal fall from it), with no punches pulled... and it's one hell of a story. -- (C) Variance

News & Interviews for Hit So Hard

View All Hit So Hard News

Critic Reviews for Hit So Hard

There's not enough of the music on view and the film would be a more effective portrait of that era if Ebersole had edited it more effectively.

Hit So Hard is a good title for the film. Courtney Love looks like someone determined to carry on doing the hitting.

The torturous tale of a remarkable survivor of the grunge era - the troubled but talented drummer for Courtney Love's band, Hole.

Ebersole pieces things together in a workmanlike way, but the tacky supertitles and camera effects often create a bit of an amateur feel.

A compelling story of rock 'n' roll excess from one of the genre's lesser known figures.

Though it feels as if many of these scenes are included because they're a side of Cobain so rarely seen, the focus appropriately never strays far from Schemel.

When the film does (eventually) focus on Schemel herself, it provides a fascinating insight into the pressures of the music business and a cautionary tale of life in the fast lane.

Watching this overlong movie is a painful experience.

While this film documents drummer Patty Schemel's struggle with drug addiction, you can't help but feel that her main role in rock 'n' roll history has been as a first-hand witness to events more important and interesting than her own story.

Hole drummer Patty Schemel's feisty personality infuses this fast-paced film, which not only documents her rollercoaster experiences with drug addition but also provides a lucid exploration of the Seattle grunge scene.

Audience Reviews for Hit So Hard

Great documentary - anyone who liked Hole or even just that 90's era of women in rock would enjoy this. Interviews with Courtney Love, Veruca Salt etc. Nice flashback and also Patty's story is interesting. Got to say, Courtney does not come off too well here (but that's not surprising!).