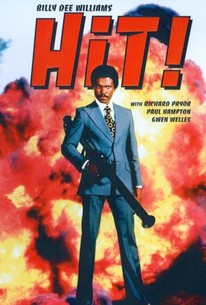 Billy Dee Williams stars as Nick Allen in Hit! When he returns from an undercover assignment for the government, he discovers that his beloved daughter has died from a heroin overdose. He traces the drugs to a huge drug ring operating out of Marseilles, France. After discovering, to his disgust, that the U.S. government is not prepared to do anything about these lowlifes, he rounds up his own private squad of anti-drug guerillas, including Mike Willmer (Richard Pryor). Only because of its superior production values, does this film narrowly escape being a bona-fide member of the blaxploitation genre.

Norman Burton
as The Director

Jerry Jones
as The Weasel
View All

[Billy Dee Williams] has developed in record lime, the ease, smoothness and likability of a big star,

... a conventional version of the mainstream crime caper with a rare African-American lead, which is the film's only memorable accomplishment.

Hit! is a super-cool movie.

There are no featured reviews for Hit! at this time.