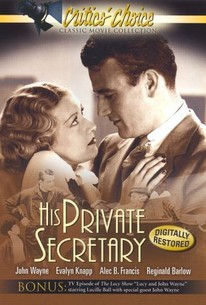 A very young John Wayne is atypically cast as a randy playboy in His Private Secretary. Much to the dismay of his businessman father, Dick Wallace (Wayne) prefers a life of wine, women and more women to honest work. The elder Wallace demands that Dick take a job as his company's collection manager, and it is in this capacity that our hero heads to the small town of Somerville to collect a debt. Here he meets pretty Marion (Evelyn Knapp), the granddaughter of the man from whom Dick must extract overdue payments. Immediately putting the moves on Marion, Dick is rebuffed with a slap and several harsh words -- and for the first time in his life, the prodigal son is really in love! Inevitably, Marion ends up working as a secretary for Dick's dad, driving the poor boy crazy in his efforts to make up for his previous boorish behavior. Excerpts from His Private Secretary have frequently shown up in TV documentaries about John Wayne, as "proof" of his inability to act in his pre-John Ford years.

Alec B. Francis
as Dr. Hall

Patrick Cunning
as Van
View All

Critic Reviews for His Private Secretary

A young John Wayne is a delight playing a millionaire's irresponsible playboy son in this charming romantic comedy.

Audience Reviews for His Private Secretary

Budget cheapie with the Duke out of the saddle and in a business suit and a tux! The acting is rough and the production values nil.

In this 1933 departure from the norm, the Duke plays a city-fied, scion of millions, jaunty, womanising playboy type ("Where'd that taco sauce come from?" "New York City?!?") after the good minister's godly granddaughter. Can he change from cad to do-right? Interesting only to see Wayne try his casual sophisticate chops, which is Cary Grant territory, pardner. He ain't half bad neither.