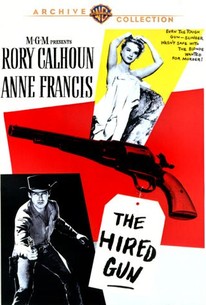 Rory Calhoun is the star of this minor oater, playing a roving gunman for hire. His latest mission is to track down a murderer and bring the killer back dead or alive. Calhoun's quarry turns out to be the alluring Anne Francis, who insists she didn't murder her husband as charged. After the usual "drop that gun and come peaceably" prelims, Francis persuades Calhoun to go after the man she claims is the real culprit. Independently produced, The Hired Gun was released by Columbia Pictures.

Regis Parton
as Clint
View All

Critic Reviews for The Hired Gun

Flatly directed and acted as if it were for a TV show.

There are no featured reviews for The Hired Gun at this time.