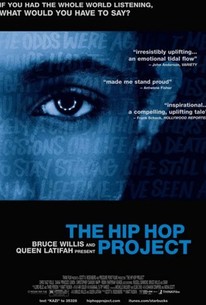 Critics Consensus: Director Matt Ruskin's enthusiasm for the project is readily apparent, but his film is unfocused, meandering, and frustrating to watch.

Critics Consensus: Director Matt Ruskin's enthusiasm for the project is readily apparent, but his film is unfocused, meandering, and frustrating to watch.

Critic Consensus: Director Matt Ruskin's enthusiasm for the project is readily apparent, but his film is unfocused, meandering, and frustrating to watch.

Chris Rolle was born into poverty in the Bahamas and found himself forced to fend for himself as a child when he was abandoned by his mother. Rolle came to America in his teens but soon found himself homeless on the mean streets of Brooklyn, NY. Rolle had a natural talent as a rapper, and had the good fortune of meeting Scott K. Rosenberg, who was the founder of Art Start, an organization that brings arts education to New York City's underprivileged. Encouraged by his contacts at Art Start, Rolle began developing a potent reputation as rapper Kharma Kazi, and soon he came to realize he wanted to give back to the community that helped lift him out of poverty. With the help of Art Start, Rolle helped found The Hip Hop Project, a workshop for aspiring hip-hop artists. Instead of simply teaching aspiring rappers about rhyming techniques or microphone handling, Rolle and his crew urged them to use rap as a way to speak out about the issues they face in their daily lives rather than rhyming about violence, sex, bling, and the gangsta lifestyle. In time, hip-hop powerhouse Russell Simmons partnered up with movie star Bruce Willis to donate a recording studio to the group, thus enabling the musicians to record and release their own record, HHP Vol. 1: Are You Feelin' Me?, issued in May 2007. The Hip Hop Project is a documentary about Rolle and The Hip Hop Project crew that offers a behind-the-scenes look at their work and their impact on a group of young people eager to hone their musical skills. The film received its world premiere at the 2006 Tribeca Film Festival.

It makes the viewer uncomfortable, too -- but it's unquestionably honest, like so much of Hip-Hop.

A big, wet, sloppy valentine to hip-hop's power to give voice to the voiceless.

First-time director Matt Ruskin is a skilled documentarian; he releases information gradually so the narrative develops in an organic fashion that is consistently engaging.

The film meanders, sidetracks, and frustrates -- few of the rap songs, some of them boasting wildly inspired couplets, are shown and heard in their entirety.

Dramatically, the movie lacks motion -- the kids don't seem a lot better off at the end -- and the point of the program escapes me. These kids badly need an education.

[Director] Ruskin is so awed by his subject that he never gains the distance needed to create a bigger, more powerful picture.

Rolle's passion and perseverance power the film, and along the way he gets a boost from rap mogul Russell Simmons and Bruce Willis.

[A] powerful and, if we're lucky, influential documentary.

Based on what we hear, though, it's hard to assess whether anyone has any breakthrough potential. Likewise, there's nothing remarkable about the filmmaking.

Even if you don't particulary care for rap, The Hip Hop Project may persuade you that there's something to be said for it, after all.

Unfortunately, this is a Hallmark version of hip-hop-and it really hurts to knock this film.

More, I can't shed my enthusiasm for what Kazi accomplished, the philanthropic legacy he has crafted to give voices to the voiceles a simply stunning achievement.

There are no featured audience reviews yet. Click the link below to see what others say about The Hip Hop Project!