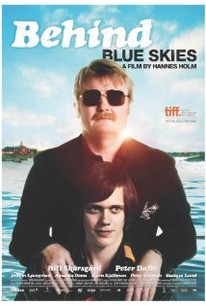 A kid looking for a summer job lands a position that forces him to grow up in a hurry in this comedy from writer and director Hannes Holm. It's 1975, and Martin (Bill Skarsgård) is a teenager looking to break out of a stifling home environment ruled by his alcoholic father and long-suffering mother. When Martin's pal Micke (Adam Pålsson) suggests they get jobs together as waiters at a resort off the Swedish coast, Martin is all for it, but before long Micke finds better things to do and Martin is left on his own. The presence of pretty fellow server Jenny (Josefin Ljungman) is a major consolation, but to his surprise, guileless Martin is soon chosen as the protégé of Gösta (Peter Dalle), the resort's short-tempered manager. Gösta clearly likes Martin and makes him his right hand man, which gives Martin a crash course in the seedy side of life when he discovers Gösta has a number of other business interests, not all of which are legal or ethical. Inspired by a true story, Himlen Ar Oskyldigt Bla (aka Behind Blue Skies) was an official selection at the 2010 Toronto International Film Festival.

Thérèse Andersson
as Eva
View All

In all, Behind Blue Skies is a serviceable coming-of-age tale, worth checking out if you're a Skarsgard fan. I'm sure Bill will be transitioning into English-language work shortly.

Skarsgård in the skärgård. Another well-directed film by the brilliant Hannes Holm - the uncrowned king of Swedish drama-comedies. Although I find the esthetic style of the 70's really ugly at it best, I'm impressed by how well they've managed to capture the era. Everything looks authentic and with great actors like Björn Källman and Peter Dalle in the cast, the performance quality is high up on the scale. Good soundtrack as well, which fit beautifully with each scene. A definite thumbs up from me.