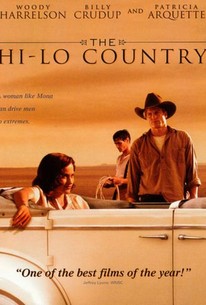 Critics Consensus: The actors fail to live up to the archetypes they portray.

Critics Consensus: The actors fail to live up to the archetypes they portray.

Critic Consensus: The actors fail to live up to the archetypes they portray.

Acclaimed director Stephen Frears helms the film version of the admired novel that for years Sam Peckinpah tried to get made. The film is an intimate story of the enduring bond of friendship between two hard-living men, set against a sweeping backdrop: the American West, post-World War II, in its twilight. Pete and Big Boy are masters of the prairie, but ultimately face trickier terrain: the human heart. Patricia Arquette co-stars as the woman who will eventually come between the two men.

Will Cascio
as Chickie Cobain

Sarge McGraw
as Nick the Bartender

Keith Walters
as Man on Horse

Donald R. Walser
as Singer at Rodeo Dance
View All

Critic Reviews for The Hi-Lo Country

Mammas, don't let your babies grow up to be cowboys. And while you're at it, don't let them grow up to make movies about cowboys either.

Everything is in place for a mythic drama, except the players, who don't begin to fill the boots of the archetypes they're meant to be.

This movie gets thrown unceremoniously to the ground.

For a film about grand passions, there is no fire to this film.

Let this tumbleweed roll on by!

A nostalgia trip in more ways than one, successfully recalling the days when meaty westerns were a frequent part of the movies' bill of fare.

A large, brawling, lusty film which boasts nothing short of mythic resonance!

Audience Reviews for The Hi-Lo Country

A miss from the usually stellar Frears. Slow moving and dull. The uninspired acting from everybody but Woody doesn't help.