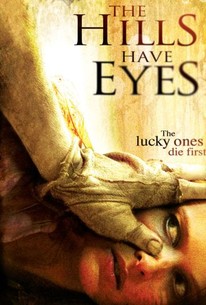 Critics Consensus: Faster paced for today's audiences, this Hills remake ratchets up the gore for the hardcore horror fans, but will turn away casual audiences.

Critics Consensus: Faster paced for today's audiences, this Hills remake ratchets up the gore for the hardcore horror fans, but will turn away casual audiences.

Critic Consensus: Faster paced for today's audiences, this Hills remake ratchets up the gore for the hardcore horror fans, but will turn away casual audiences.

The Hills Have Eyes Photos

"The Hills Have Eyes" is the story of a family road trip that goes terrifyingly awry when the travelers become stranded in a government atomic testing zone. Miles from nowhere, the Carters soon realize the seemingly uninhabited wasteland is actually the breeding ground of a blood-thirsty mutant family. And, they are the prey.

News & Interviews for The Hills Have Eyes

View All The Hills Have Eyes News

Critic Reviews for The Hills Have Eyes

... Aja and his gorehound ilk are making movies that simply wallow in state-of-the-art displays of torture, sadism and sexual humiliation.

These Hills are more to be endured than enjoyed.

When its makers, director Alexandre Aja and his co-writer Gregory Levasseur, apply the fresh gloss to the old grit, they remember to apply the thinnest layer possible without skimping on the roughhouse humor.

A good movie that never aims to achieve perfection. [Full Review in Spanish]

For such a dark, gritty, ferocious film, the big, melodramatic finish betrays its creepy, low-budget aesthetic.

Aja's film is partly a critique of nuclear war, partly a horror fable about the divide between Americans and the violence it inevitably causes.

Craven was looking to simply scare some folks with blunt violence and a lecture on the primal nature of man. Aja's effort is an absolute declaration of war.

Falls into the trap of delivering its relentless arsenal of painful images with almost sedated enthusiasm. The movie has no venom.

On the strength of their 2003 slasher flick, High Tension, Craven hired director-writer Alexandre Aja and writer Grégory Levasseur, and the result is one of the most exhilarating, intense, and engrossing Hollywood shockers ever made.

Audience Reviews for The Hills Have Eyes

I can't see any good reason to remake a bad movie changing the nature of the depraved villains but keeping all of those lame faults found in the original movie - especially characters who are irritatingly stupid and the only smart one being the dog.

I don't remember the original "The Hills Have Eyes". I saw the movie, at least a couple of times, when I was younger, but it failed to leave a lasting impression on me. I think I even owned the VHS version at some point. I don't remember it being a bad movie, boring perhaps. I seem to remember it being just another reason to consider Wes Craven criminally overrated. Maybe I'll revisit the original at some point. Until then, when I'm in the mood to watch a Horror movie, you probably won't hear me say, "You know what I'm in the mood for? I'd really like to watch the 1970's version of 'The Hills Have Eyes' directed by Wes Craven." It probably won't happen anytime soon. The remake on the other hand, is a truly disturbing slab of cinema. It was unleashed at a time when remaking Horror movies was routine. Beginning with "The Texas Chainsaw Massacre", filmmakers that were unable to capture the grisly atmosphere that made the originals terrifying, would instead, amplify the violence and gore. In most cases, while entertaining in their own way, the efforts fell significantly short of the originals. I don't think that's the case with "The Hills Have Eyes". The 2006 version, succeeded in becoming an excruciating spectacle. Although exaggerated at times, the deformed "hill people" are a lurid visual. As foul as the antagonists are visually, the most distressing elements of the two hour journey is the sordid behavior on display. Alexandre Aja's re-imagining runs a gauntlet of malevolent moments. The viewer is exposed to mutilation, suicide, kidnapping, cannibalism, and at it's worst, delves into rape and sexual humiliation. I'd venture to guess that even the most desensitized members of the audience would find something in the film to cringe at. It's difficult to say, whether I'd be still consider this film successful if the shock value wore off, but I imagine that's irrelevant. The point of a Horror movie is to make you uncomfortable. "The Hills Have Eyes" succeeds.

In terms of production values, budget, and effects, this is definitely a suprerior film to Wes Craven's original. In terms of story and overall quality, well, that's purely dependent on personal opinion. Once again, the plot is that of a family on vacation whose vehicle breaks down in the desert. They are stranded at an abandoned nuclear test site popualted by some mutants whoe sole purpose is to kill and cause mayhem, and it becomes a family versus family fight ot the death for survival. With this film, they at least spell out the implied backstory for the mutants, and, while it's okay, they still don't have any real motivation. I could let that slide if the film had slightly more of a point and weren't gruesome basically for the sake of it. The original had violence and terror, but it was also more suspenseful. Yes, this film is creepy, and there's some tense moments, but the focus is more on the violence and gore. The effects are far better this time, and there's plenty of them, but I think things may have gone slightly overboard. The acting this tiem around is also slightly improved, but the chasracters still really seem unlikeable. Aaron Stanford is pretty decent though. The film tries to have some subtext by doing a Straw Dogs sort of thing with his character, and, it's okay. However, he's no Hoffman, and Aja is no Peckinpah. I shouldn't like this movie. It's disgusting, vile, and there's not much in the way of redeeming qualities. However, it manages to be slick and polished, yet still incredibly gritty and raw. The original gets a pass for its limitations, but this one should know better, and could have done without so many cliches. Plus, it's intense, but there's not much impact to it, beyond a visceral level. I wasn't bored though, even if, like the original, there's pacing issues (slow start, drawn out conclusion, dynamite middle). The film definitely has style, though, and admittedly we do need this sort of thing once in a while, if only to balance out the universe. Obviously I'm conflicted here, because it does some things better than Craven's, yet it fails to achieve the same sort of impact and misses the point when it comes to putting the horror in "horror film". Still, this is shockingly far better than it had any right to be. B-.

The Hill's Have Eyes is actually a pretty good remake considering that most remakes miss the mark in terms of what the original did. Most of the time, the storyline is watered down, the acting is done by a poor cast of talentless actor and they go more for shock value than for actual horror. This film succeeds at delivering fear and tension in the audience, something that remakes fail in almost every case. Director Alexandre Aja who directed the film Haute Tension (High Tension) directs and as with his second film, he delivers the gore. What makes this standout is the good cast; they deliver above average performance, considering that this is a remake. For what it is, they keep most of the original elements of the 1977 classic, but they have added a few new aspects to the story. The film succeeds where most modern retellings failed; it delivered a shocking, tense and memorable horror experience. The film has its flaws, but for the most part it manages at being one demented nightmare of a film. This remake definitely amps up the stakes in terms of shocks and thrills. The original was a Slasher type exploitation film that relied on atmosphere to create its memorable moments of blood and gore. With this one, the production values are better and unlike the original, it does not have a raw, grind house exploitation feel to it. Nonetheless for what it is, it's a s good film for what it is, despite the fact that it relies more on gore and effects to create its effects. This is a fun film that horror fans are sure to enjoy.

The Hills Have Eyes Quotes