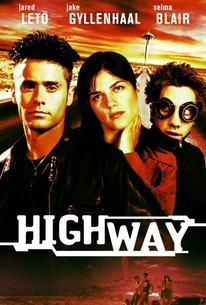 Two friends hit the road to escape some homicidal gangsters with a score to settle in this angsty Gen-X flick set against the backdrop of the mid-'90s grunge music scene. Highway opens with its mohawked post-teen hero Jack (Jared Leto), up to his usual routine: smoking pot, cleaning pools, and engaging in vigorous sex with a mobster's wife. It isn't long before vengeful thugs come calling to his Las Vegas trailer-park home, however, and Jack has to flee town with his drug-dealing best buddy, Pilot (Jake Gyllenhaal). The two decide to travel to Seattle -- in the week preceding Kurt Cobain's suicide -- and along the way they encounter a succession of drifters, losers, and hangers-on, including a sweet-hearted prostitute named Cassie (Selma Blair). Highway's working title was "A Leonard Cohen Afterworld," a reference to a lyric from Kurt Cobain's song "Pennyroyal Tea"; the film was written by Scott Rosenberg, who previously made a name for himself with Things to Do in Denver When You're Dead, Beautiful Girls, and Con Air.

Sean Dalgarn
as Softboy
View All

Aggressively overdirected, with lots of 'Look how cool this angle is' and 'See how tricky my editing is.'

Ahead of its time, but not in a flattering way.

Doesn't have many guts.

Cool road trip drama stars Jared Leto and Jake Gyllenhaal as two best friends who find themselves on the run from the mob.

A pretty good road trip movie with some bizarre things happening along the way.