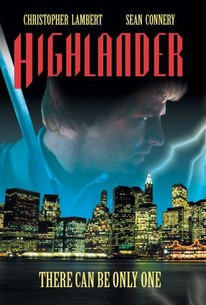 Critics Consensus: People hate Highlander because it's cheesy, bombastic, and absurd. And people love it for the same reasons.

Critics Consensus: People hate Highlander because it's cheesy, bombastic, and absurd. And people love it for the same reasons.

Critic Consensus: People hate Highlander because it's cheesy, bombastic, and absurd. And people love it for the same reasons.

Among humans for centuries, an immortal specie existed. Connor MacLeod is a member of this specie. Unaware of his powers, he is unable to explain his revival after his apparent death in a clan-fight in the 15th century. This convinces the superstitious villagers to stone him and drive him out of the village. He then encounters another one of his kind, Ramirez, who indoctrinates him in the ways of the immortals. The only way these "immortals" can die is by having their heads cut off. Given the credo that there can only be one, you can imagine a race where everyone tries to chop everyone else's head off. Of course, in such a race, there'll be factions, and MacLeod and Ramirez are one side battling the forces of evil immortals who want to take over the planet and wreak destruction on it.

Nicola Ramsey
as Rachel as a Girl

Prince Howell
as Drunk in Hotel

Buckley Norris
as Derelict
View All

Lambert, with his beetle brow, broken nose, and vaguely crossed eyes, remains an amiable oddball presence, and Sean Connery radiates charm and nobility in a bit as an elder immortal who shows Lambert the rules of the game.

It's a lot of utterly preposterous fun, even if it doesn't quite hang together.

Since none of the characters makes sense even on the movie's own terms, Highlander keeps on exploding for almost two hours, with nothing at stake.

A truly heroic stomp through time and space.

Highlander is a visionary action/sci-fi film which deftly explores themes of eternal life, the temptation of power, and true love.

Its relevance in the imaginary of those who grew up in the eighties is such that none of its two horrendous sequels are capable of destroying it. [Full Review in Spanish]

Highlander is the visual counterpart to rock band Queen (who supply a number of songs on the soundtrack) - big, brash and operatic filmmaking of the highest order.

Before it came to a thudding halt with a craven, creatively bankrupt franchise cash-grab, the rich world of "Highlander" - in all its bombast and bereavement - was, and is, worth getting lost in for two hours.

A bit clumsy in spots, but Highlander is a thoroughly entertaining action-fantasy picture.

OK fantasy adventure film that has achieved cult status to many.

Smalltown-high-school-does-Shakespeare level bad, nearly inevitably schlocky ... and yet some remnant memory of the dream age of dream chivalry and swordplay, some romance of adventure, tenaciously remains to infuse this one into the hearts of Lost Boys everywhere. Of course there's Sean Connery, validating the adventure while forgiving the cheese (and there's a truckload of it), singlehandedly lifting the thing out of the unforgivable categories while simultaneously inflicting your friends with your terrible Connery impersonation. And then there's the not-to-be-scruntinized-too-closely catchphrase: "There can be only one!" Boys really believe that's true.

A bat shit crazy premise, a fantastic soundtrack, Sean Connery as a mentor character, ground-breaking camera and editing work that still oozes 1980s in every second: this is a guilty pleasure feast and still one of the greatest action fantasy films of all time. While the unprepared audience has as little idea what the bloody hell is going on as medieval Connor MacLeod at first, things soon start making sense - in their own perverted way. And when Michael Kamen's fantastic score blows fanfares all over the final sword fight you realize that you're actually watching a somewhat classic knight's tale, just with a few very fresh and unusual ingredients. A classic and actually that one film that never should have gotten a sequel, prequel, TV show or cartoon. Best to ignore all those and have fun with this. There can be only one.