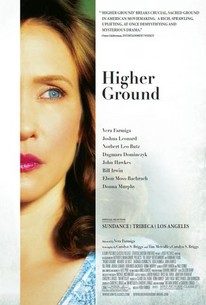 Critics Consensus: With Higher Ground, star and debuting director Vera Farmiga takes viewers on a challenging spiritual journey whose missteps are easily overcome by its many rich rewards.

Critics Consensus: With Higher Ground, star and debuting director Vera Farmiga takes viewers on a challenging spiritual journey whose missteps are easily overcome by its many rich rewards.

Critic Consensus: With Higher Ground, star and debuting director Vera Farmiga takes viewers on a challenging spiritual journey whose missteps are easily overcome by its many rich rewards.

Vera Farmiga's directorial debut, Higher Ground, depicts the landscape of a tight-knit spiritual community thrown off-kilter when one of their own begins to question her faith. Inspired by screenwriter Carolyn S. Briggs' memoir, This Dark World, the film tells the story of a thoughtful woman's struggles with belief, love, and trust-in human relationships as well as in God. -- (C) Sony Classics

Deborah Hedwall
as Faye
View All

This cool, calculated who's-hunting-who piece that brings home all the requisite tension, gunplay and fighting with a great deal of cinematic style.

Vera Farmiga makes a heavenly debut as a director with Higher Ground, a compelling drama about a woman's spiritual journey.

The film's quiet realism demands from us our own act of faith: We're asked to watch closely and to listen intently in the promise of a greater reward to come. Well, the promise is partly kept.

Farmiga's first film is good enough to make us look forward to her next one.

The film is refreshingly free of proselytizing. In its place, however, is a whiff of condescension.

This film might easily have settled for mocking religion. Instead, it's a fascinating glimpse into a culture that forces some people to choose between fitting in and opting out.

One of those quiet, thoughtful Indies that comes along every once in awhile-leaving an impression.

It can seem a bit of a mishmash at times, but it's all held together thanks to some impressive acting from the three versions of Corinne and a script that tackles a subject most screenwriters won't touch in any meaningful way.

It rather presents a quaint coming-of-faith tale that's not especially captivating to watch.

The picture never settles for easy answers, and these warmly-drawn characters are granted a surprising complexity.

Higher Ground is a fantastic debut for Farmiga.

Farmiga challenges herself and the viewer. Some may shrink from that challenge, but thankfully, our gutsy director and star never does

An intriguing, if ultimately unsuccessful take on religion and how one woman (Vera Farmiga) begins to struggle with her faith while living within a somewhat cultish group of people. Farmiga shows she is a capable director, and her performance is outstanding, but ultimately the movie feels too simple, like she is settling instead of going all-in and taking real risks. In the end, the film benefits from its character development and remains interesting even if it is slowly paced, but ultimately it is just an average offering on the topic of religion that is not too memorable. Far from bad, but skipable.

Faith and Feminism: The Movie. That's a pretty good way to describe this, the directorial debut of its star Vera Farmiga. It's loosely based on some novelist's memoirs, and it follows a woman named Corrine who has spent the vast majority of her life immersed in a tightly-knit community of Fundamentalist Christians. Her life with them has been fine, but the older she grows, thew more her closeness to them begins to fracture. She starts to have a crisis of faith, and her task of trying to be simultaneously holy and worldly really takes a toll on her and those around her. This is an emotional, challenging, and thoughtful film, and Expected it to be no less than this given it's and indie, and someone like Farmiga is at the helm. She's a great actress, an intellectual feminist, and very sensitive when it comes to shedding light on the particular subjects the film deals with, namely, how to be a good faithful Fundamentalist, yet also be a believer in feminism. Besides herself, Farmiga acts alongside a crack cast that includes reliable supporters like John Hawkes, Joshua Leonard, Norbert Leo Butz, and Dagmara Dominczyk among others. All of the performances are quite good, and you can see that this was really an earnest labor of love for them. Movies like Saved! had previously tackled this kind of subject matter, but I found this treatment to be quite fresh and absorbing. As someone who has personally had his faith tested, I felt I could relate to this film to some degree, but I really don't know how an atheist or some other type of person would react to this. As such, maybe it's best to just treat this as primarily a character study instead of a specific treatise or something. The music is good, the camera work is decent, and the film is actually about something important, yet is also entertaining. As such, this is definitely one I recommend. I also hope to see more directorial work from Farmiga in the future, because, even though I love her acting, she really shows a lot of promise behind the camera, too.

Poignant thought-provoking moments strung together in an overall poorly-structured piece. I really wanted to like this movie since there was a lot of material that I felt I could be personally connected with. However, I don't feel like I got to know anybody in the film. Especially the supporting character. Some many "special" relationships felt surprisingly empty due to the lack of depth that the supporting characters are given. It is an interesting first film and one that had a lot of really good ideas. Sadly though, they werent fleshed out as well as I would have wanted and it was hard to get really immersed in the film.

Huge believability (no double entendre intended) factor in this movie. It managed an insiders look at a closed religious community without becoming either preachy or dismissing the faith of those involved. It's just the story of one woman's trying and failing to feel the affect of pure belief. Nicely told. Ambiguous ending was just the right tone, because matters of faith and what community you chose to belong to are not matters that get settled in two hours or even, sometimes, a life-time.