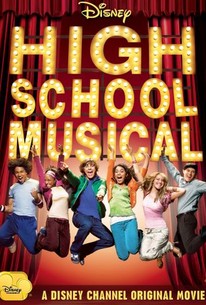 Critics Consensus: High School Musical is brazenly saccharine, but it makes up for it with its memorable show tunes, eye-popping choreography, and appealing cast.

Critic Consensus: High School Musical is brazenly saccharine, but it makes up for it with its memorable show tunes, eye-popping choreography, and appealing cast.

The captain of the East High basketball team and the key member of the academic club shock the student body by teaming to audition for the upcoming school musical in a Disney Channel Original Movie that's all about being yourself and following your dreams. Troy (Zac Efron) is best known as the player who keeps the East High basketball team on the scoreboard. Of course, life isn't always about athletics, though, and as Troy slam-dunks on the boards, beautiful and brainy Gabriella (Vanessa Anne Hudgens) is raising the reputation of East High as the key member of the school's successful academic team. Despite their outgoing natures, no one would ever peg Troy and Gabriella as theater types. When word gets out that this popular pair has secretly chosen to reach for the stars and try their luck on the stage, the students of East High are about to learn an important lesson in teamwork while gearing up for a musical performance that will have their audience dancing in the aisles.

Although the plot's not particularly novel, writer Peter Barsocchini's script maintains the fantasy elements while incorporating topical and relevant themes into the story.

It would be unfair not to salute the movie's message about broadening one's horizons and not being limited by stereotypes or peer pressure. But when an admirable message is packaged in such treacle, it just makes the message seem treacly, too.

Mostly, High School Musical makes an appealing case for an idealized vision of high school, where individuality is celebrated and even the mean kids know everyone's name.

High School Musical is kitsch, sexless and hopelessly clichéd, but it manages to offer a giddy sense of fun to a generation that's overdosing on seriousness.

Sure, it has its flaws... but the film skilfully crafts an exuberant uplifting climax that results in a warm smile-inducing feeling that remains after the credits have rolled, and sometimes that's all a film needs to do.

While [High School Musical] will inspire more than a few choice eye rolls from parents, its messages are far healthier for kids, particularly at the impressionable "tween" stage, than many of its competitors.

Adults may be bewildered by the film's runaway success, however for youngsters the catchy songs, gentle humour and overall vibrancy are likely to prove an irresistible combination.

Ok, they don't need to reinvent the wheel, but it is somewhat ironic that the main theme of the flick is not sticking to the status quo (there is even a whole song about it) while all you see are recycled ideas and stereotypical characters.

The film can seem a bit preachy at times, and because this is a Disney-produced feature, the cheese factor is turned way up. Still, the music isn't half bad considering most of the songs contain lyrics like "Everyone is special in their own way."

The direction, by Footloose choreographer and Gilmore Girls director Kenny Ortega, has about as much depth as you'd expect from a Disney Channel original movie, but the film's energetic and lively.

Unless you have a kid under the age of seven, you'll probably find High School Musical a little too cheesy for its own good.

What infuses this movie with much of its spunk are [Zac] Efron's and [Vanessa Anne] Hudgens' lively performances; both come across as friendly, well-adjusted, and immensely likable.

Corny, to be sure, High School Musical is most appealing to those below the age of 13, but even older viewers can appreciate the important message the film carries. Despite a few cringe-worthy moments, this made-for-tv phenomenon has relatively catchy and memorable songs and features charismatic, albeit exaggerated, performances.

"Kids today don't know nuthin' bout entertainment! Back in my day we had quality, like Grease and Saturday Night Fever, wit' songs dat meant somethin' and good dancin' too ... dey don't make 'em like dat ennymore! Sniff!" But wait, they do, they do, or at least they did. Grease, again, with hair gel ... instead of Pomade.

The soundtrack is enjoyable and is an entertaining movie to a point, however if this is supposed to be the best of teen movies then thats very sad! Its an average movie with average acting, yes the singing is good but you shouldnt have high expectations for this movie!

Cute, fun and my daughter and I had a good time watiching.