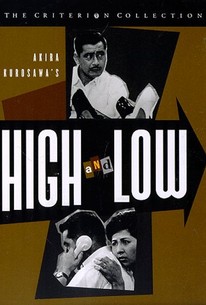 Toshirô Mifune is unforgettable as Kingo Gondo, a wealthy industrialist whose family becomes the target of a cold-blooded kidnapper in Akira Kurosawa's highly influential High and Low (Tengoku to jigoku).

Koji Mitsui
as Newspaperman
View All

News & Interviews for High and Low (Tengoku to jigoku)

View All High and Low (Tengoku to jigoku) News

Critic Reviews for High and Low (Tengoku to jigoku)

One of the best detective thrillers ever filmed.

While not a masterpiece on par with Kurosawa's best work, High And Low is a fine example of his craft, and further proof that it's not a few masterpieces but the overall scope of a career that defines a great director.

High and Low illuminates its world with a wholeness and complexity you rarely see in film.

It's like walking in a strange city without a map: You have no idea where you're headed, what's around the next corner, and where the touristy part of the city ends, and the red light district begins.

A masterpiece - one of the best (if not THE best) crime-suspense thrillers ever fashioned, and certainly the most profound.

Superb crime thriller is one of Kurosawa's richest dramatic experiences.

Gondo may not be wielding a sword, but he is as much a warrior as any of Mifune's samurai characters, and he really hates to lose.

One of the all-time-great 'procedurals'...the devilish fun is in the details for Kurosawa. [Blu-ray]

The images populate the widescreen frame like a pressure cooker that is ready to blow up. And in High and Low, blow up they do.

Kurosawa revels in the details of detection, as well as doing miraculous things with the composition of his widescreen frame.

As the title suggests this is a film about the haves and the have-nots, or the high and the low.

Audience Reviews for High and Low (Tengoku to jigoku)

Have to admit to some eye rolling when this was put on for me to watch. Initially looked like a very old movie and borefest, but I quickly had to eat my words! Very thought provoking and engrossing thriller. Is 143 minutes long, yet doesn't drag. Goes off in many directions and keeps you guessing. Fantastic.

A botched kidnapping can make for a taut thriller as Kurosawa proves in this fluid tale, years and years before CSI or any number of police procedurals (seemly broadcast hourly of late). The chase is the thing here, and Mifune's role, though central, is not the only game in town by any means. Very enjoyable watching the Toyko police go after their man.

Managed to hit the lows more than highs for me. The storyline wasn't gripping or interesting enough, although its main flaw being that for most of the time, it seemed as if the actors were supposed to look their part/character more rather than acting one. I'm no Kurosowa fan, but did enjoy Rashomon and had fair expectations from this one owing to that experience. Obviously being a Kurosowa flick didn't help any in sitting through this 140+ minutes long dramatic thriller.

Prior to seeign this, I was only familiar with Kurosawa's historical period piece epics. As it turns out, he made many contemporary films as well, this being one of them. This is an adaptation of a work by Ed McBain, who specialized noir fiction. This resulting adaptation is a westernized but Japanese take on film noir, and the results are pretty impressive. The story concerns a wealthy industrialist who is planning on trying to buy out his company after disagreements on what direction the company should take. In order to do this, he has put up a considerable amoutn of money, even the mortgage to his home. A short time after a meeting with others bigwigs of his comany, his son goes missing, and he gets a call saying that his son has been kidnapped. It turns out however that the wrong kod was taken, and the caller has his chauffeur's son instead. What follows is a wonderful moral dilemma: either the man can pay the ransom, save the kid and lose everyhting else (his life depends on his job) or save his job and let a kid who isn't his be killed. Overall, this is a very tense film that not only works as a crime thriller, but also gives great insight into the contemporary (at the time) values of Japanese society and the innerworkings of Japanese law enforcement. This is a long film, and it really feels like two in one, with the first half devoted to dealing with the moral debate, and the second half being a police procedural that follows the efforts to track down the kidnapper and bring him to justice. The film is mostly shot in wideshots, with a number of long takes. The beauty of all this is how well this works in getting the audience involved in the situations and really amping up the tension. After a while I barely even noticied that fair amoutns of time passed between cuts. When long takes don't bring attention to themselves, then you know this is a sign that the director is using them for the right reasons, and isn't trying to be a showoff. They actually have power and meaning here. Granted, this is Kurosawa we're talking about, but still. Aside from this though, the cinematography overall is quite well done and the black and white looks great and really adds to the atmosphere. The acting is top notch. Long time Kurosawa collaborator Toshiro Mifune is wonderful as Kingo Gondo the conflicted industrialist. Tatsuya Nakadai is good as Inspector Tokura, and Tsutomu Yamazaki is suitably menacing as the kidnapper Ginji Takeuchi. The acting and cinematography aren't the only highlights though, as the whole film is just a real piece of work. It's got a compelling stoary that's well written and conceived, and it brings up some great issues and situations for the characters to deal with. You care about what happens and really get involved in things. The only real issue I had is that the film is rather long and seemed to drag here and there at times. I didn't mind it too much because I was engrossed in the story, but yeah, I did start to get a bit fidgety, so it could have been tighter. All in all, this is some really good stuff. I give this a pretty solid recommendation.