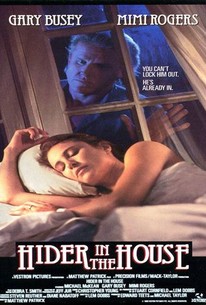 Hider in the House is a well-made and produced but ultimately unsatisfying and formulaic slasher thriller. Tom (Gary Busey) was an abused child who learned to avoid the abuse by hiding under sinks, in closets or anywhere he could be out of sight. After spending 10 years in a mental institution for setting a fire that killed his parents, Tom is released and finds a newly built house where he makes his home in the attic. The house is bought by Julie (Mimi Rogers) and Phil Dryer (Michael McKean) and their children. Tom begins to feel that he is part of the family, but when Phil is unfaithful to Julie, Tom plots his revenge. Busey is compelling in his role and builds Tom's character with skill to show him as both a dangerous and sympathetic psychopath. Unfortunately, the film does not fulfil its potential and slides into a predictable, formula ending, but the skillful direction and the good performance of Busey make this film well-worth viewing.

Jimmy Lewis
as Policeman
View All

Critic Reviews for Hider in the House

There are no critic reviews yet for Hider in the House. Keep checking Rotten Tomatoes for updates!

There are no featured reviews for Hider in the House at this time.

Hider in the House Quotes