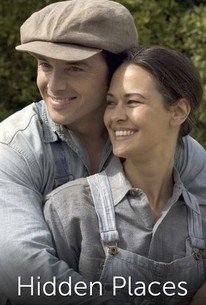 Robert Tate Miller adapts Lynn Austin's best-selling, Christy Award-winning 2001 novel for the screen in the family-friendly drama Hidden Places. Sydney Penny (All My Children) stars as Eliza Wyatt, a Christian widow and mother of two grappling with a loss of faith, and forced to pull in the harvest before the bank forecloses on her family property. At the end of her rope, Eliza receives some greatly valued assistance from down-and-out military veteran Gabe Harper (Jason Gedrick) and venerable Aunt Batty (The Partridge Family's Shirley Jones). The film thus sings an ode to selfless love, the commitment to family, and the necessity of faith in God and others. Yelena Lanskaya directs this Hallmark Entertainment production.

Carlie Westerman
as Becky
View All

There are no critic reviews yet for Hidden Places. Keep checking Rotten Tomatoes for updates!

There are no featured audience reviews yet. Click the link below to see what others say about Hidden Places!