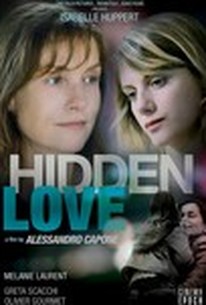 Acclaimed actress Isabelle Huppert stars in this downbeat tale of a suicidal mental patient trapped in an endless maze of despair following the death of her only child. Initially raised in an acrid household, later locked into a dicey marriage, and ultimately saddled with a daughter she never wanted, Danielle attempts to take her own life multiple times before doctors are left with no other choice than to lock her away for the sake of her own safety. Not even sympathetic psychiatrist Dr. Neilson (Greta Scacchi) seems able to break through to the stoic patient whose hollow gaze that hints that any hope for salvation has long been lost. ~ Jason Buchanan, Rovi

A movie that knows exactly who it is about, but doesn't know what it thinks of them.

To director-writer Alessandro Capone, suicide is just a plot device.

There are no featured reviews for Hidden Love at this time.