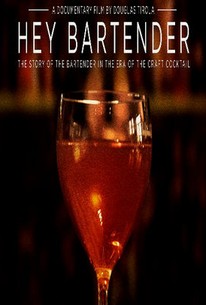 The documentary focuses on two bartenders trying to achieve their dreams through the world of bartending. After being injured a Marine turns his goals to becoming a rock star bartender at the best cocktail bar in the world. A former bank executive who bought the corner bar in his hometown struggles to keep it afloat in a community that no longer values a place where everyone knows your name. Featuring the most famous bartenders in the world along with unprecedented access to the most exclusive bars in New York City and commentary from Graydon Carter, Danny Meyer and Amy Sacco.(c) Official Facebook

Critics Consensus: The Internship Could Use Some Work

The colorful, fast-paced documentary "Hey Bartender" celebrates the renaissance of the craft cocktail and the men and women who mix them with rock star aplomb.

Engagingly looks at the new age of the craft cocktail, and the masters who mix them.

This isn't the cocktail doc enthusiasts are waiting for.

Treats cocktail crafting as if it were nuclear engineering.

Here's a movie that will test the limits of your ability to watch other people having a good time.

More successful as a sort of moving-picture coffee-table book homage to the glamor of the perfectly wrought cocktail than as a personalized narrative.

As a drinker looking at the beautifully photographed cocktails, I finally started to understand why foodies go nuts for similar exposés about chefs.

Probably a hit and a significant achievement among people already interested in cocktail culture, but unlikely to grab those who couldn't care less about the difference between a smash and a flip.

This will be the only time you can have this much fun with mixed drinks and not need a designated driver.

For a cocktail documentary backed by a major independent distillery, Hey Bartender never devolves into the pro-drinking propaganda you might imagine.

Stirring and sophisticated, it's filled with insightful, engaging observations, like "The shot is the bartender's handshake."

There are no featured reviews for Hey Bartender at this time.