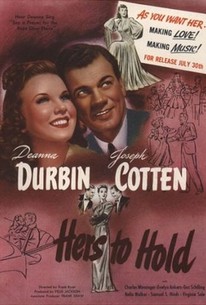 Deanna Durbin is all grown up in this film, the unofficial sequel to her "Three Smart Girls" films. Durbin plays Penelope Craig, the starry-eyed daughter of Judson and Dorothy Craig. Developing a crush on much-older playboy Bill Morley, Penelope stops at nothing to land the elusive Morley as her husband.

Janet Shaw
as Girl at Factory

William B. Davidson
as Al

Jennifer Holt
as Girl
View All

Critic Reviews for Hers to Hold

There are no critic reviews yet for Hers to Hold. Keep checking Rotten Tomatoes for updates!

Audience Reviews for Hers to Hold

There are no featured audience reviews yet. Click the link below to see what others say about Hers to Hold!

Hers to Hold Quotes