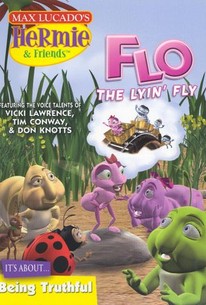 Hermie and Friends: Flo the Lyin' Fly represents the latest installment in theologian Max Lucado's computer-animated adventures of Hermie the Caterpillar and his insect pals. Featuring the vocal talents of comic greats Tim Conway, Vicki Lawrence, and the late, beloved Don Knotts, Flo the Lyin' Fly relays the story of Flo (voiced by Lawrence), a little fly with a big tendency to fib and stretch the truth. Taking as its inspiration Proverbs 19:5, this program entertains children with colorful animated characters, hilarious dialogue, and catchy musical numbers, while teaching them the value of honesty. Additional vocal talents include Frank Peretti as Puffy the Dragonfly, and Christian rock band Third Day as the Water Beetles.

Mac Powell
as Stringo the Water Beetle
View All

There are no critic reviews yet for Hermie & Friends: Flo the Lyin' Fly. Keep checking Rotten Tomatoes for updates!

There are no featured reviews for Hermie & Friends: Flo the Lyin' Fly at this time.