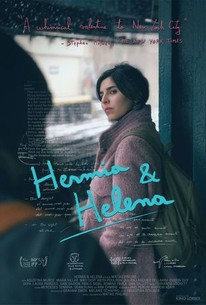 Camila (Agustina Muñoz, The Princess of France), a young Argentine theater director, travels from Buenos Aires to New York for an artist residency to work on a new Spanish translation of Shakespeare's A Midsummer Night's Dream. Upon her arrival, she quickly realizes that her work isn't compensating for the loss of her friends and the lover she left behind. When she begins to receive a series of mysterious postcards from Danièle (Mati Diop, Claire Denis's 35 Shots of Rum), a former participant in the same residency, Camila second-guesses her artistic endeavors and begins to seek answers about her past. Hermia & Helena mingles actors from Matías Piñeiro's Buenos Aires repertory with stalwarts of New York's independent film scene (Keith Poulson, Dustin Guy Defa, Dan Sallitt). It is a film of dead ends and new beginnings, navigating amorous detours across hemispheres and languages, in which the words of Shakespeare clash with the entanglements of modern, digital life.

Ethan Spigland
as Librarian No. 1

Ji Park
as Librarian No. 2
View All

For discerning moviegoers, the affably disorienting "Hermia & Helena" might just be the right kind of midsummer night's dreaminess.

Hermia & Helena presents a unique anomaly -- it's able to capture life at its most low-key but still manages to exemplify style over substance.

Part of the charm of Hermia & Helena is in the way it freely and randomly plays with form, employing luxuriantly slow dissolves, unexpected snatches of superimposed text, and even a black-and-white film-within-the-film.

A peculiar film, one both steely and delicate.

There are a few different potential films within Hermia & Helena - a Shakespeare adaptation, a tale of romantic relationships, a tale of family - but the totality proves a sunny and affable literary collage.

By positioning Shakespeare within a chatty tale of young adulthood - and giving it a feminist slant - Piñeiro proves the vitality of the material without becoming subservient to it.

It seems with Hermia & Helena, Piñeiro is upping the ante a little bit and put more cinematic playfulness in his small ways. And it's lovely.

It's a bloated plot where not much happens, and the only development of consequence comes near the film's end, apropos of nothing.

Camila's romantic whimsy and casual curiosity about the past ultimately leads to an unearthing of deep seeded, unexpected emotion within Hermia & Helena, signaling a new level of artistic maturity for Piñeiro and his regular collaborators.

Always delightful, Hermia & Helena sees Piñeiro making an auteur film that fits into his oeuvre while expanding it in exciting directions-and en route, he makes New York his own.

The film runs smoothly, with naturalism, dropping the main secrets of the main character in small doses as they pass through both cities. [Full review in Spanish]

I went to see a new Argentine movie and a 1990s Whit Stillman movie broke out. I'm not complaining at all.

There are no featured audience reviews yet. Click the link below to see what others say about Hermia & Helena!