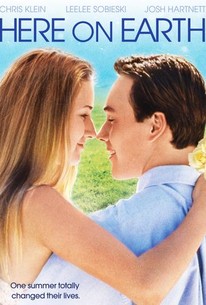 Critics Consensus: Critics say Here on Earth's weakness comes from its script. The story may appeal to young teenage girls, but it suffers from being overly sentimental and formulaic. The cinematography, however, is lovely in how it captures its Minnesota setting.

Critics Consensus: Critics say Here on Earth's weakness comes from its script. The story may appeal to young teenage girls, but it suffers from being overly sentimental and formulaic. The cinematography, however, is lovely in how it captures its Minnesota setting.

Critic Consensus: Critics say Here on Earth's weakness comes from its script. The story may appeal to young teenage girls, but it suffers from being overly sentimental and formulaic. The cinematography, however, is lovely in how it captures its Minnesota setting.

In this romantic drama, a young man must make some difficult decisions when he discovers that his girlfriend's future is almost used up. Kelley (Chris Klein) and Samantha (Leelee Sobieski) are waiting out the summer after their high school graduation before moving on to college. Although Kelley comes from a wealthy family and Samantha's folks are working class, they soon find that they have more in common than they imagined, and they fall in love. However, Samantha's parents (Annette O'Toole and Bruce Greenwood) soon learn that their daughter has only a few more months to live. When Kelley learns the awful truth, he must decide if he should stay by the side of the first girl he's ever loved or obey his father's wishes and go to college. This was the second feature film for director Mark Piznarski, who has directed episodes of the TV series E.R., My So-Called Life, and Relativity, as well as the TV miniseries The 60s.

Critic Reviews for Here on Earth

For a movie about the ferocity of first love, it seems curiously pallid and passionless.

On the bright side, Here on Earth does present viewers with a couple of handy rules to avoid bad movies. Beware of any movie that has characters reciting poetry to each other.

Here on Earth is a missed opportunity.

Here on Earth hungers for the nostalgia of an Elia Kazan-style farmbelt romantic tragedy à la East of Eden, but the end result is more akin to a soggy Troy Donahue-Sandra Dee weeper.

This is just the type of "dignified" tragedy Louis B. Mayer loved to churn out in the 1940s, where characters - even the unsavory ones - acted so noble they practically turned to statues before your eyes.

Demonstrates the lowest, most unscrupulous technique of filmmaking -- it involves no imagination, creativity, or original ideas.

[Director Mark Piznarski]should be cited for excessive use of slow motion, sun-dappled trees and golden light; one more cliche violation and his license to direct would be forfeit.

Here on Earth plods along predictably, hammering home its moral points and struggling to spin a spiritual haze around the kids' romance.

Audience Reviews for Here on Earth

This was really a sweet movie.

So the girl was dating an jerk and then fell for a prick. I didn't really get this movie.

A surgary tale about young love. I liked it.

[font=Arial][color=darkred]The story 'Earth' portrays is nothing groundbreaking: new guy arrives in town, sweeps girl off her feet because he's "different" than the rest, earns ire from mean boyfriend, and eventually gets the girl. It's been the plot from everything from 'Lady and the Tramp' to 'Edward Scissorhands'. But even though the theme is based in predictability, the creators of 'Here on Earth' seem to have lazily put forth an execution.[/color][/font] [font=Arial][color=darkred]The movie and its screenwriter have their logic completely reversed. The girl's boyfriend is supposed to be the wife-beating snotty jerk, and the new kid is supposed to be the nice sensitive "different" guy. But in 'Earth', Klein is the snotty Richy Rich whose colors never change, and Josh Hartnett is the dependable and established nice guy boyfriend. What kind of way is it to build dramatic sympathy toward a character who flights from a nice caring guy to have sex with an arogant newbie as soon as he arrives?! The structure of this tragic tale is no way to build drama, only contempt for the female lead.[/color][/font] [font=Arial][color=darkred]Whatever high-minded message 'Earth' is hopelessly aiming for is destroyed by dialogue so cheesy that it could be considered a side dish at a local Taco Bell. By the time Klein starts naming Leelee's breasts after different states in the Union the movie loses what little credibility it had - or thought it did. ("Massachusettes welcomes you") It's a wonder most of these young actors can even say what they do with a straight face.[/color][/font] [font=Arial][color=#8b0000][i]Spoilers follow as I make fun of this movie.[/i][/color][/font] [font=Arial][color=darkred]Just when you're wondering why the hell Leelee is doing the things she does and it looks as if we may reach a conclusion or insight - [i]BAM![/i] - she has cancer and dies. This ranks up with "it was all just a dream" as one of the cheapest ways to sneek out of an uncomfortable or unexplainable position. It turns out our Joan of Arc bumped her knee and somehow that has exploded into unstoppable cancer. The doctor tells the distraught family members that they always suspected this could happen. Like hell! Everytime I stub my damn toe it never crosses my mind I've contracted cancer.[/color][/font] [font=Arial][color=darkred]'Here on Earth' is supposed to be the tear-jerker for the teeny bopper audience out there; the 'Love Story' for the under twenty. But the only thing wringing from this formulaic clunker of a sob story is a healthy outpouring of sap, moral high ground, and a warning to always wear knee pads.[/color][/font] [font=Arial][color=darkred]Nate's Grade: C- [/color][/font]