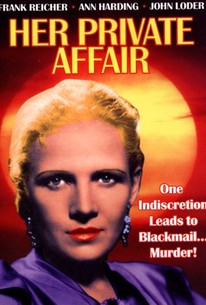 In this drama, a woman and her husband, a judge, have a major marital spat and she leaves him to travel to Italy where she gets nonromantically entangled with a silver-tongued extortionist. When she comes home, he is right behind her. He begins blackmailing her for both her money and her love. Later he makes her go to his apartment. During a struggle she grabs his gun and shoots him. The extortionist's butler is arrested for the death, but he is acquitted. The butler finds the judge's wife and forces her to confess.

Critic Reviews for Her Private Affair

There are no critic reviews yet for Her Private Affair. Keep checking Rotten Tomatoes for updates!

There are no featured reviews for Her Private Affair at this time.