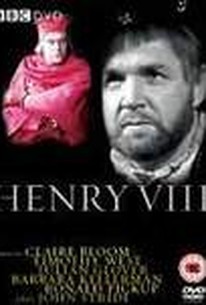 Part of a television series entitled "The Shakespeare Plays," Henry VIII is the story of political intrigue and betrayal surrounding this besieged monarch's reign.

There are no critic reviews yet for Henry VIII. Keep checking Rotten Tomatoes for updates!

I have now watched all 37 of the BBC's Complete Works of Shakespeare in the rough chronological order in which Shakespeare wrote them. For some it was a first viewing, for others an umpteenth re-viewing of a favorite play. Overall, I give the BBC huge credit for this monumental undertaking from 1978 to 1985, I believe. The constraints of short production time and small budget are often apparent, but the idea behind such a project is to be commended. Often first-rate actors are employed, but just as often actors who are too green in their roles are called upon.

With this last, in terms of written chronology, Claire Bloom as Katherine of Aragon, John Stride as Henry VIII, and Barbara Kellerman(n) as Anne Boleyn (Bullen), together with an astonishing performance by Timothy West as Cardinal Wolsey, all control enough of the major scenes to make this one of the best, although one of the earliest BBC produced plays (1979).

This has been an amazing three-month viewing adventure reconfirming that, for me, Shakespeare is indeed the greatest writer of all time.