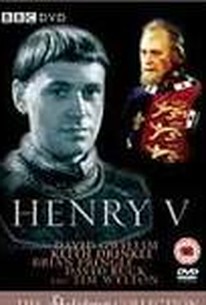 Part of a television series entitled "The Shakespeare Plays," this episode depicts one of England's most beloved Kings. Beginning with the invasion of France, Henry V is shown as a just King, equally able to inspire the admiration of his soldiers as he tirelessly leads them in battle and the traitors with whom he must deal. Also shown is his marriage to the Princess of France, a marriage of state to ensure peace between the nations. ~ Tana Hobart, Rovi

There are no critic reviews yet for Henry V. Keep checking Rotten Tomatoes for updates!

I give this one four stars strictly for fidelity to the "script." In fact all of the BBC productions get higher marks for attempting to stay close to Shakespeare's words. But at the risk of beating the proverbial dead horse, you need only to watch this one and Branagh's back-to-back in order to see that Branagh's version is a cut above for the life it breathes into the words. The Crispin Day speech, for instance, is supposed to be rousing -- inspirational in the most literal sense for the British troops that are heavily outnumbered. Branagh captures this and inspires not only his soldiers, but the audience as well.