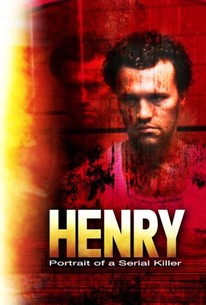 Critics Consensus: Henry: Portrait of a Serial Killer is an effective, chilling profile of a killer that is sure to shock and disturb.

Critics Consensus: Henry: Portrait of a Serial Killer is an effective, chilling profile of a killer that is sure to shock and disturb.

Critic Consensus: Henry: Portrait of a Serial Killer is an effective, chilling profile of a killer that is sure to shock and disturb.

Although the title makes Henry: Portrait of a Serial Killer seem like a cut-rate slasher flick, the movie is actually one of the most disturbing and terrifying examinations of mass murderers ever filmed. Loosely based on the story of confessed murderer Henry Lee Lucas, the film follows Henry (Michael Rooker) as he selects innocent victims -- occasionally with his roommate Otis (Tom Towles) -- and kills them, capturing their deaths on videotape. Many of these murders rank among the most brutal ever portrayed on film. The violence and the clinical, detached portrayal of Henry and his horrifying actions make Henry: Portrait of a Serial Killer a disturbing, thought-provoking film, but it certainly isn't one for every taste. Finished in 1986, the movie wasn't released until 1990, when it was greeted with both positive reviews and considerable controversy.

Kristin Finger
as Hooker No. 2

Flo Spink
as Woman In Cadillac

John Scafidi
as Kid with Football No. 1

Benjamin Passman
as Kid with Football No. 2

Anita Ores
as Mall Shopper No. 1

Megan Ores
as Mall Shopper No. 2

Cheri Jones
as Mall Shopper No. 3

Peter Van Wagner
as Bum No. 1

Tom McKearn
as Bum No. 2

Frank Coranado
as Bum No. 3

Waleed B. Ali
as Store Clerk

News & Interviews for Henry: Portrait of a Serial Killer

View All Henry: Portrait of a Serial Killer News

Critic Reviews for Henry: Portrait of a Serial Killer

[Director John McNaughton] shows few of Henry's dozen or so crimes. Instead he reveals the victims, at the scenes of their deaths, in slow zoom shots accompanied by elegiac music. He is a coroner with a touch of the poet.

In a world in which eight nearly identical Friday the 13th movies offer the adventures of Jason the ax-murderer as entertainment for teen-agers, maybe we do need this sobering alternative.

The film is an honest and disturbing attempt to come to grips with the sort of modern horror that we must -- more urgently every day -- try to understand.

Sure, it's compelling; the nature of the material guarantees that. But it doesn't seem to be telling us much more than that the world is a scary place and murder is ugly. We knew those things. This is tabloid chic.

Henry: Portrait of a Serial Killer is as fine a film as it is a brutally disturbing one.

A disturbing, realistic film loosely based on Henry Lee Lucas that also questions our relationship to violence in media. One of the best horrors of the 1980s.

Henry: Portrait of a Serial Killer has a creepy, city-after-dark overtone, an existential chill. It carries a true grindhouse whiff while staking its claim as art.

It is unspeakably unpleasant, and it is almost perfect.

The director's artistry overshadows his grind house titillations, though they're still to be found aplenty...not just grim and gross or even disturbing; it's hurtful.

It resonates with nightmarish energies, as if possessed by a malevolent quality that keeps its subject matter piercing in this era of violent saturation.

Audience Reviews for Henry: Portrait of a Serial Killer

Apart from the solid performances, there's little else to praise in this mediocre film that mistakenly believes that resorting to shocking, purposeless violence is enough to draw what it assumes to be the "portrait of a serial killer," instead of developing his motivations.

The invention of the NC-17 rating was a big controversy in the eighties, and this film instigated the debate thanks to its scenes of brutality and murder at the hands of serial killer Henry (Rooker). Released four years after it was made amid controversy, "Henry" remains a pivotal film in horror and changed the filming of psychosis and showed a serial killer in his environment for the very first time. By today's standards this isn't as bad as the torture porn that has recently become a trend, and definitely not as gory as it seemed at the time, but it's still freaky. Henry is still a very sadistic and creepy serial killer, and Rooker gives a performance that still chills to this day. The revelation that he feels bad for his friend's sister (Arnold) and that he can express empathy was also a new concept, since serial killers are often villainized by popular media. Henry is the real father of today's lovable killer, "Dexter", and that show owes much to this early film.

Loosely based on the life of Henry Lee Lucas, this is a raw, gritty and overall savage character study of a serial killer. This is a film that is brilliantly directed by John McNaughton, Henry: Portrait of a Serial Killer is a disturbing picture that will definitely make you feel uneasy from start to finish. The movie is unflinching in its realism, and is not for the faint of heart. In terms of horror, this is one of the finest movies in the psychological horror genre. The cast deliver some impressive performances, especially Michael Rooker in a captivating and truly demented performance as the film's antagonist, Henry. Horror fans looking for a truly unique and uneasy genre picture will surely enjoy this movie, and for anyone looking for a well crafted and realistic horror yarn, this is one to watch. The movie is powerful in the sense that it can make you feel horrified, uncomfortable, and disturbed all at once, and is a rare horror film, especial this decade due to the fact that cinemas were overfilling with countless Slasher films, which are quite entertaining, but never achieved a sense of what a film like this could have pulled off. This is a horror film with a plot, and it successfully creates terror by its atmosphere and visuals as well as the performance of its lead actor. Like I said, Slashers are a mindless horror fun for the most part, that focuses on ridiculous kill sequences to create the carnage. Henry: Portrait of a Serial Killer on the other hand delivers some of the most truly disturbing images in horror history and you simply can't tear yourself away from such a movie. The film is a back to basics horror picture that doesn't use anything ridiculous to create the terror, the notion that is based on a real life serial killer is horrifying enough.