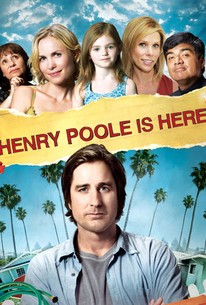 Critics Consensus: Full of Hallmark-truisms and pop songs presented with strained significance, this comic foible intends less to convert than to preach to the choir.

Critics Consensus: Full of Hallmark-truisms and pop songs presented with strained significance, this comic foible intends less to convert than to preach to the choir.

Critic Consensus: Full of Hallmark-truisms and pop songs presented with strained significance, this comic foible intends less to convert than to preach to the choir.

Given a grim diagnosis during a routine doctor's checkup, a man who once had it all finds his attempt to disappear into a working-class suburb and spend his remaining days subsisting on vodka and junk food hopelessly disrupted when he falls for the beautiful divorcée next door and a busybody neighbor notices a miraculous stain on his stucco wall. Henry Poole (Luke Wilson) had a comfortable life and a beautiful fiancée. But just when it seemed that the future couldn't look any brighter for Henry, a visit to the doctor's office casts a dark cloud over his sunny outlook. Shattered, Henry wants nothing more in life than to simply vanish into his surroundings, and what better way to accomplish that feat than to purchase a cookie-cutter house in a working-class suburb and spend his final days awaiting the inevitable in peaceful solitude. Unfortunately for Henry, his new neighbors aren't about to let the handsome neighborhood newcomer spend his days sulking. The first to stop by and welcome Henry to his new home is local yenta Esperanza (Adriana Barraza), who comes knocking on his door with a fresh plate of homemade tamales and laundry list of questions.Later, after taking notice of sad-eyed divorcée Dawn (Radha Mitchell) and her taciturn eight-year-old daughter, Millie (Morgan Lily), who hasn't spoken a work since her father left, Henry finds his self-imposed exile shattered when Esperanza notices a stain on his stucco wall that seems to possess miraculous powers. Before Henry can say "Hail Mary," Esperanza is leading pilgrimages to the "holy site" in his backyard and inviting Father Salizar (George Lopez) to give his blessings to the sacrosanct blemish. As skeptical as Henry may be about the healing powers of the curious apparition, however, his growing friendship with young Millie not only brings him closer to Dawn, but also proves to him that there's no escaping the power of hope. Cheryl Hines, Richard Benjamin, and Jessica Walter co-star in a wry existential comedy drama penned by first-time feature film screenwriter Albert Torres, and directed by Mark Pellington (Arlington Road, The Mothman Prophecies). ~ Jason Buchanan, Rovi

Tell him to go away.

The Lord may work in mysterious ways, but the filmmakers behind sensitive, life-affirming indie dramas about brooding young men stumbling towards redemption are an awfully predictable lot.

If you're a sucker for a New Age-meets-old-time-religion tale and you have nothing else to do this weekend, then this one's for you. Everyone else should stay home.

Although the ending is unsurprising, Henry Poole remains an interesting character.

Henry too often seems like a suffering cipher rather than a real guy with real problems.

Thanks to Wilson's sympathetic performance and Pellington's restraint, Henry Poole is Here may just succeed in warming hearts and lifting spirits.

It is a quiet, introspective story that, clumsily at some times and heartbreakingly at others, explores a broken man's search for meaning and the gift of faith.

Henry Poole Is Here is so stupid it makes you itch. I half expected to exit the theater with gushing stigmata.

What, exactly, constitutes a miracle? Do they really happen? You'll be thinking about it, hopefully even talking about it, after the credits roll.

Good intentions, and a rare attempt to embrace spirituality on screen, aren't enough to make Henry Poole is Here a worthy destination.

There is something contrived about this story in which people with major problems find a resolution.

Drives home the themes in a natural and honest way that never comes off as preachy.

I was pleasantly surprised that I enjoyed this film as much as I did. I didn't expect it to be good whatsoever, but it was. I thought that the film, though not perfect had a pretty interesting story, with a good cast. The film could have been better of course, but for what it was, it wasn't awful. The subject matter of the film is a bit too preachy, but even with that in mind, it doesn't go overboard. The cast makes this film worth watching, and the story is pretty good, and I enjoyed the film. I wouldn't call the film excellent, but for what it was, it was a fine little film with a good cast, and the cast made the story more interesting as the characters they played were quite interesting, and with that, the cast selected for the parts are perfect for the roles. I enjoyed the message the movie delivered, and it had a funny, heartfelt emotion story to it, which a lot of films lack. Luke Wilson, whom I'm not a fan of delivers a good performance here, and he has good chemistry with fellow actress Radha Mitchell. Henry Poole is Here has good comedic elements mixed in with good dramatic elements. What made this film good for me was the good cast who made the somewhat ordinary story to be better. Sometimes a good cast can elevated an ordinary plot into something pretty good and this is the case with Henry Poole is Here. An engaging story with a good cast makes this a film that is far better than one might think. I had low expectations with this film, I it surprised me at how good it really was.

Didn't really warm to this. Not because of anything "controversial" about it - just found it depressing and boring. Radha Mitchell is good, as always, but this film is a snore.

So, it was another saturday...where I finally waltzed downstairs close to noon hoping for Hitchcock...I found this instead and was surprisingly delighted. BFFFer -- I so think you would ADORE this one. Review, TBC.

"Henry Poole Is Here" is a wonderful little movie about the mystery of God (or whatever you want to call it) and the equally mysterious power of humans to save each other. It does at times get hokey and overly simple, and at other times the super-stylish direction becomes heavy-handed. But by and large, this film from director Mark Pellington (who has worked mostly in rock videos and television) is a refreshing joy. Pellington, first-time screenwriter Albert Torres, and lead actor Luke Wilson all show impressive courage in going against the grain of a ferociously atheist pop culture by openly pondering questions about God and expecting an open-minded, intelligent, non-fundamentalist audience to stay with them. Wilson plays a lonely man who's just gotten some difficult news and recedes into himself. He buys a non-descript, broken-down house in a disheveled, lower-middle-class corner of greater Los Angeles, where he leads the life of a morose shut-in. One day an image appears on the side of his shabby house, and an older woman who lives next door reads spiritual meaning into it. As a good college-educated atheist, the man of course laughs at her. But soon some inexplicable and powerful things happen that cause him and some other neighbors to start to wonder about the mysterious side of life. A strong, almost eerie performance from seven-year-old Morgan Lily (a child actor whose career is definitely worth watching) expands the film nicely but does occasionally cause it to border on schmaltz. Wilson's consistent under-statement helps keep things from tipping too far in that direction, as does the nice, non-showy supporting work from Radha Mitchell. "Henry Poole" is recommended to anyone willing to consider the limits of atheist explanations of life. The movie poster you see in the upper left makes the film seem sunny and light, which is not true at all. It's actually mostly dark and heavy.