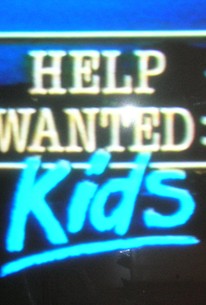 Real-life married couple Cindy Williams and Bill Hudson star as New York yuppies Lisa and Tom Burke, who moved to Arizona when both are hired by a new ad agency. The couple's boss is big on "family values" and encourages his employees to project an appropriate image. Unfortunately, the Burkes are childless, and for a while it looks as if their fabulous new job will end before it begins. But not to worry: Lisa and Tom hit upon a foolproof scheme to create an "instant" family by advertising for a pair of rambunctious youngsters to pose as the Burkes' children. Since this film originally aired as an installment of ABC's Disney Sunday Movie anthology, one can easily guess the outcome from the moment the opening credits fade from view. Help Wanted: Kids debuted on February 2, 1986.

Arlene Banas
as Lady with Clipboard

Films like this give the impression that the director, writer and producer are more interested in filling time than being novel and creative.

"Help Wanted'' could use a little help -- from a scriptwriter, a casting director, and from a knowledgeable psychologist.

There are no featured reviews for Help Wanted: Kids at this time.