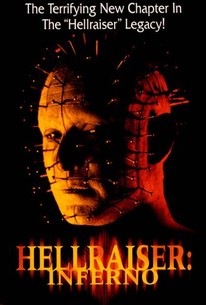 Supernatural villain Pinhead finds himself on the wrong side of the law in this, the fifth film in the Hellraiser franchise. Joseph (Craig Sheffer) is a detective with the LAPD who one morning discovers he's no longer living in California -- he's been exiled to Hades, and the only way to escape is by solving the mystery of the all-powerful puzzle box. The box is now in the hands of the fearsome demon Pinhead (Doug Bradley), and Joseph finds himself in a life-and-death struggle with the demon for control of the puzzle box. Hellraiser: Inferno also stars Nicholas Turturro as Tony, Sasha Barrese as Daphne, Noelle Evans as Melanie, and James Remar as Dr. Paul Gregory.

Darlene Levin
as Twin No.1

Maureen Sue Levin
as Twin No.2

Kazuhiro Yokoyama
as Asian Cowboy No.1

Akihiro Noguchi
as Asian Cowboy No.2
View All

Though it is sometimes plagued by the problems typical of low-budget horror, you can tell at all times that Inferno has a lot of ambition for a B-grade picture of its kind - and that sense makes all the difference.

Consider watching it again and suddenly the idea of having your flesh torn apart by meathooks for eternity won't sound so bad after all.

Different in style from its predecessors and Pinhead is thrown in, well, just to have Pinhead in it I guess. It feels like this film doesn't even belong in the franchise, but by putting "Hellraiser" in the title it well help it make some extra money. It's smart to stay away from these straight to DVD films.

Being the first direct to video sequel in the Hellraiser franchise, Hellraiser Inferno is actually pretty good. The film plays out as a cop film, but with horror elements etched into the overall plot. Hey you got to put Pinhead somewhere, right? Inferno is a departure from the traditional Hellraiser films that came before it. The film tries to break new ground, and it does work for the most part. However at times, it doesn't. Inferno is a very interesting story, and the first hour of the film steadily builds to a decent enough climax with Pinhead and the rest of the Cenobites. Not a flawless sequel, but good considering the awful ones that came after it, Hellseeker, Deader and Deadworld, Hellraiser Inferno is a refreshing new take, and it really is interesting to see. A shady detective solves the puzzle box, and he summons Pinhead and his Cenobites. While he's trying to escape Pinhead wrath, there's a killer named The Engineer and he must hunt down the killer and try to escape the wrath of Pinhead. Hellraiser Inferno is one of the better direct to video sequels that I've seen, and unfortunately for this series, it's also the last good sequel. The acting is standard for direct to video film, and it's pretty decent considering. I am pretty impressed overall, and I thought this film would have been a good end to the Hellraiser franchise, however three bad sequels later, there seems to be no end in sight. Many people have claimed that this retains the essence of the first two films, and it does somewhat, but nothing will ever top Clive Barker's original masterpiece of horror. Still, this is a worthy direct to video sequel worth checking out.

one thing i can't stop thinking about Pinhead, since he is on the cover of every goddamn one of these movies, is "what the fuck does he have to do with these movies?" this is my second Hellraiser that i've seen and he has just as little to do with the story as the first one. in fact, the character he played in this one it turns out could have been used to show him quite a bit in scenes, but instead they use James Remar with a beard and glasses and at the last 5 minutes he rips off his face and we're like "Oooh fffuck, that was Pinhead! you totally punk'd me, bra!" so i figure next Hellraiser, there will be a mysterious secretary figure played by Emma Stone and at the final scene, she'll be babbling some fucking spooky ass dialogue, "you see, the lamented configuration pyramid unpuzzled the door to lucifer's puberty and now its Super Sweet Satanic Sixteen Suffer-dome!" and thats when she rips her pig-face off and we see an even more atrocious head. then Pinhead says "welcome to Suffer-Dome, asshole." and he gets another 5K for blessing the set of Hellraiser: Suffer-Dome with his great talent.

This is a series that is very dear to my heart. With the lowest of expectations, it was still necessary for me to rent this. Hellraiser, despite its many flaws, is still one of the best horror films ever made. It's sequel, Hellbound: Hellraiser II, although often inconsistent, was in many ways even stronger and more inventive. Hellraiser III: Hell on Earth brought the series to American producers, an American director with American actors (except Pinhead), and American horror audiences. Although this changed the gothic horror series to a rock-n-roll horror flick, it still maintained the basic themes originally developed by Clive Barker. Hellraiser: Bloodline, although loosely based on the Hellraiser mythology, stunned fans with its complete and utter lack of soul; an 82 minute abuse of celluloid that only Alan Smithee (the name used when you're too embarrassed to put your own name) could have directed. Then, without warning, four years after Bloodline, the fifth installment arrived at video stores. Joseph (Craig Sheffer) is a dirty cop. He lies, he steals, he abuses drugs, he cheats on his wife to sleep with hookers, you get the idea. When he finds the box at a nasty crime scene, that is, The Lament Configuration, the box that opens the gates to Hell, he can't help but tinker with it. When it opens, he suffers a rather trippy nightmare but survives it. But things are different. People he knows keep getting murdered and at each crime scene he finds the finger of a child that's still alive somewhere. In his quest to find this child he is consistently thrown for a loop by the mysterious Engineer. In the end, in a rather clever development, it turns out that the boy he's been looking for is himself and he's been in Hell ever since he opened the box. There are several things that are impressive about this movie. The first is that it is actually a movie. It has a beginning, a middle, an end, a plot, and several functional elements that allow it to stand as a feature. Even from the opening credits, it far surpassed the previous installment. Secondly, it has a clear and detectable style that's consistent with a director that must care at least a little bit. It has some rather artful cinematographic choices that generally we only see in theatrical releases. Thirdly, it has a cast of moderately recognizable actors (moreso than even the third film). Craig Sheffer (A River Runs Through It, The Grave, Clive Barker's Nightbreed), Nicholas Turturro (John Turturro's brother, a regular on NYPD Blue), and James Remar (What Lies Beneath and a host of small roles on film and tv) star in what couldn't have been a very high paying job. Although the movie is gory, it relies less on shock value and more on the suggestion that something nasty is happening or has happened out of sight. This is at times very effective, although at times simply cheap. There are two main things that keep this from being a "good" movie. First and foremost, it is not a Hellraiser movie. The presence of the box and the minute or two of Pinhead's screentime are the only things that tie it to the series. The box is really just used as a plot catalyst to get the main character into Hell. Pinhead only appears for a split second in the beginning and a minute or so at the end... and he really doesn't have anything interesting to say. Pinhead's provoking commentary has always been one of the greatest assets to the series and I could tell Doug Bradley just wanted to cry. It's really just a supernatural detective story. The classic sentimental scores of the first films is missing as well. And, just to be a stickler for details, the film seems to suggest that Pinhead is The Engineer, a character discussed in the novel. Having read the novel, I can assure you that Pinhead is not The Engineer. And if you've seen the second film, you would know it was The Engineer that made Pinhead in the first place. On the other hand, some moments pay homage to the earlier films: hooks on chains, the pillar of souls, and a version of The Chatterer. The other thing that holds this movie back is direct-to-video syndrome. The acting ranges from pretty good to functional but never really inspiring. In Sheffer's defense, the main role is very demanding, but he often resorts to yelling and holding his breath instead of emoting. The special effects are pretty weak, particularly on the demons (cenobites if you will), but there are a few innovative images. The story sets up a lot of variables in the beginning but tries too hard to wrap them all up in the end. And the attempt to attach a moral to the story (which, as far as I can tell is "don't be such a schmuck") is a weak move. But as co-writer and director, Scott Derrickson does a pretty decent job. Taking into account the damaged series of films and the fact that Derrickson graduated from USC only a few years ago (this is his first feature), he deserves praise for putting together a stylized horror story. In the end, what we're left with is a pretty good extended episode of The Twilight Zone. Is it a worthy addition to the Hellraiser lore? Not if you're thinking of the first two, but if you're thinking of the last two, at least this is a movie.