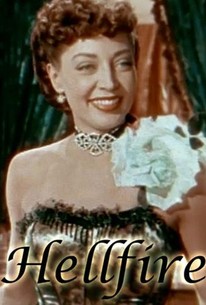 Western star William Elliot always insisted that his idol was silent-film cowboy William S. Hart. Elliot's Hellfire, then, can be seen as his tribute to the 1916 Bill Hart classic Hell's Hinges. Elliot plays a hard-bitten frontier gambler whose life is saved by a preacher. When the preacher dies as a result, Elliot vows to mend his ways. He becomes a minister himself, planning to finish constructing a church that his predecessor had started. To finance this project, he hopes to collect the reward on female outlaw Marie Windsor. She resists all attempts to bring her to justice, but after a climactic shoot-out with the rest of the criminal element in town, the wounded Windsor repents her sins and agrees to turn herself in. Hellfire was written by Dorrell and Stuart E. McGowan, who later collaborated on the long-running TV anthology Death Valley Days.

Kenneth MacDonald
as Man with Warning

Heenan Elliott
as Townsman
View All

There are no featured reviews for Hellfire at this time.