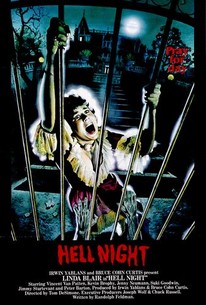 This plodding, derivative slasher opus -- a surprise box-office hit -- stars Exorcist vet Linda Blair as one of a quartet of sorority and fraternity pledges required to spend the title evening of their initiation inside the spooky Garth Manor. The mansion was the site of a gruesome multiple murder, wherein the owner killed his wife and three of his four deformed children before taking his own life. After the four pledges bed down for the night (mainly with each other, though Blair is called upon for the standard "virginal heroine" role here), mischievous upperclassmen descend into the house, intending to scare them out of their wits...but something even more repulsive than a pack of drunken frat-boys beats them to it. It comes as no surprise that Garth's fourth child -- apparently the most monstrous of the bunch -- is still roaming the premises, and doesn't take kindly to strangers. An early foray onto exploitation turf for director Tom de Simone, this film has a fairly stylish look, though mired by underlit photography and silly performances. Blair is appealing, but her role is sadly underwritten.

Jenny Neumann
as May

This particular slasher set itself apart from the era's deluge of them by being somewhat of a genre-mashup with an old school haunted house movie ... you practically expect Vincent Price to step out and reveal himself from behind a curtain.

Hell Night may have an intriguing set-up, but ultimately it suffers from bland execution and a rather uneventful narrative, which results in just another forgettable slasher from the 80s.

In that rare company of slasher films that aren't just good by the standards of their subgenre, but manage to round the corner to being legitimately good works of horror cinema.

Hell Night brought out the gimp at least a decade before Pulp Fiction was even a twinkle in Quentin Tarantino's eye.

A worthwhile entry into the 80's mad-slasher wave.

Trapped overnight in a haunted mansion with a homicidal maniac and doomed to making all the moves movies 30 years later would make serious fun of ("I'm going down in the basement without lights to see what that sound was. You guys stay here."), this 1980's horror turn asks the question: what could go wrong? Linda Blair stars. It's fun.

Effective Slasher, Hell Night is a fun treat despite its flaws. The film is an underrated horror yarn that stars Linda Blair and Vincent Van Patten. With effective kills, this one should appeal to horror fans looking for Obscured, forgotten titles. Hell Night is entertaining from start to finish, and boasts enough entertainment value to please the most demanding genre fan. This film has its imperfections, but is held together by Linda Blair's performance that is pretty good and makes the film worth seeing despite its cheesiness. As a Slasher film, this one works well and is far better than most run of the mill Slashers of the early 1980's. This is a good flick that has plenty to offer. Although Hell Night doesn't reinvent the formula, it still has all the ingredients to make for an effective horror flick. At times the acting, and dialogue suffer, but Slasher films are not going to win any big prizes. As far as the genre is concerned, this is a fine little flick that is a must see for genre fans. The gore is great and each kill is intense, also there's plenty of suspense and a hint of atmosphere due to the fact that this was filmed in a Victorian mansion, which adds a creepier feel to the picture. Although the film relies on the derivative Slasher formula, the production values and setting of the movie make it a tad more accomplished than most in the genre. I very much enjoyed this film, and it is an obscured gem of the golden era of Slasher flicks.

Having not seen Hell Night since I was about 12 and having found a used copy, I decided to give it a spin. The only copy of the film that I had seen was a squashed full screen VHS tape that was muddy, dark and just nearly impossible to watch and make any real sense out of. Fortunately, the DVD I found of it isn't, and I was finally able to experience it properly for the first time. I found it to be surprisingly effective and creepy. It's not a body count sort of slasher movie as there's hardly any victims to be served up to the unseen force terrorizing these young college students that are stuck in a haunted mansion all night under an initiation for a fraternity. There's actually some very good dialogue buried in there; not always delivered at the highest levels, obviously, but refeshingly realistic at times. The back and forth between Linda Blair and Peter Barton is mainly what I'm referring to. Everyone seems to be having a good time, and it shows in their performances. The movie loses its focus at times and gets a little bit silly towards the end, but overall, it has some great atmosphere and some genuine scares. I can't even really call it a slasher because it doesn't go by that particular formula, but it's a well-produced horror movie that was worth the profits it raked in.

This movie starts out like a typical college prank haunted house story with the students joking around and then maybe the house really is haunted. It isn't scary or exciting at all until the end. The end was a pretty good surprise, and I kinda liked it, but other than that, it's not such a good movie.