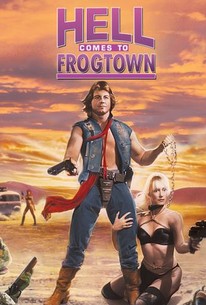 The great nuclear holocaust has come and gone, and humanity is hanging on a string. Women rule what's left, and the world is filled with giant mutant humanoid frogs who have started their own communities. Fertile human males have become one of the rarest things on Earth. This really low-budget sci-fi adventure chronicles the exploits of one of those men, the wandering loner Sam Hell (as played by former wrestler Rowdy Roddy Piper). The tale begins as Hell is caught and tried for raping a woman. Realizing that he is fertile, Medtech, the organization devoted to repopulating the world, takes him and forces him to wear high-tech underwear designed to control his lusty tendencies and to keep him from squandering his seed on infertile ladies. The organization then forces him to go deep into froggy territory to bring back the fertile women stolen by the amphibian's leader. ~ Sandra Brennan, Rovi

Nicholas Worth
as Bull

Edye Byrde
as Patton
View All

[Hell Comes To Frogtown will] win you over with its charm, its knowing sense of humor and genre roots, and most of all its secret weapon: the eternally lovable "Rowdy" Roddy Piper.

At any rate, Hell Comes to Frogtown is a decent flick, warts and all.

Brimming with classic '80s cheese, machismo, insta-quotable dialogue, a bevy of beauties and some ridiculous-yet-brilliant monstrous bad guys, watching Hell Comes to Frogtown, even to this day, is a viewing experience that's truly unique.

If you rent a film with this title, you deserve whatever you get. Utter crapola.

Sam Hell...Hell comes to Frogtown, nice little play on words there, just like 'Wild Wild West' with James West. This movie came along way after John Carpenter's 'Escape from New York' but the influences are clear. I might also add that this movie probably gave Carpenter a solid reason to cast Piper in the lead of his cult movie 'They Live' which sees him play a similar smartass role. Sam Hell is one of the last males left alive with a high sperm count, yep that's right. In a post-apocalyptic world (cue lots of desert) where most have succumbed to atomic fallout Mr Hell is one of few who can breed, and breed well. So the organisation of warrior-nurses (a government organisation) grab Hell and force him to breed with sexy females in order to boost the human race...yes you are reading this correctly. Problem is the only group of fertile women around have been pinched by the mutants of Frogtown for...reasons. So its up to the one man army Sam Hell to bust into Frogtown and save the sexy females...then slam dunk em all. In all honesty this really does sound like a big pile of low budget, cheap-ass, tacky soft porn poo. The entire notion is like something from the 'Flesh Gordon' franchise for nipples sake...errr I mean Pete's sake. One stud left in a post-apocalyptic world who must boink all the lovely ladies as part of his job...oh geez! The funny thing is the movie is indeed a cheap silly throwaway piece of fluff but its also a semi-worthy trashfest. If you didn't know any better you'd swear this was a John Carpenter flick, but as said that's probably because director Jackson has taken most ideas from 'Escape from New York'. The whole concept of having Hell locked into a government owned steel chastity belt that will explode if he runs off or tries to tamper with it is a blatant ripoff. Sure the idea is childishly amusing and makes for some cringeworthy moments of overacting but its basically a below the belt version (no pun intended) of Snake Plissken's internal explosive device. His mission is all too familiar as well, a high risk rescue from the mutants of Frogtown. He's gotta zip in and out rescuing the damsels without anyone realising what's happened, only then will his groin be released. Luckily he does have two sexy females to accompany him on the mission...if they can stop trying to hump him of course. Strangely enough this isn't really sexy even though it sounds like it, way too many shots of a half naked Piper for my liking. Then of course you have the character of Hell who is pretty much a carbon copy of Mr Plissken. He has the shaggy long hair, the unusual attire which looks like a mish mash of styles, weapons galore and of course a gruff, butch, chauvinistic wisecracking persona. The only difference here is Hell is more of a comedic character for the most part, almost like a parody. Seriously though why does he have those two long bits of red cloth at the front and rear of his jeans?? It looks like a native American influence...but why??! The enemy here are humanoid amphibians, mutants, but I was unsure if they were suppose to be mutated humans or actual mutated amphibians from the atomic fallout. If they were indeed real frogs before the mutation I must ask where on earth all these frogs came from to make up this big population! plus why just amphibians? why nothing else? There also seems to be various types of amphibians too, like bullfrogs and a salamander? Most of the main amphibian characters are rubber masks and bodysuits which admittedly worked pretty well, the large rubber masks were accurate looking and appropriately wet n slimy. It all looks a bit basic these days of course, the mouths don't move very well with no lip sync whilst the rubber suits are obvious, but they do the job and at least look like real frogs. Most background characters are simple makeup jobs which stand out a bit but lets not get too picky here (ahem). Most of the movie does look cheap and doesn't really have much going for it. There is a sort of car chase sequence near the end, some sort of fisticuffs between characters which is all too fake looking and a little bit of sexy tomfoolery with boobies. I did like the use of the old abandoned steel mill for Frogtown (I presume it was a steel mill, could be wrong). For the most part its all a bit rubbish though, there isn't any real pending threat to anyone at any point which is the main issue. I always got the impression they could just sit down and have a good natter over everything as the mutants don't seem all that bad. Its easy to see why this has become a cult classic, especially with a title like that. In my opinion its all down to the great performance by Roddy Piper who is a really solid action comedy star and very much underrated if you ask me. This guy has proved himself twice with this movie and 'They Live', he knows how to deliver cornball lines, he's endearing, quirky, amusing, looks good and somehow makes all this shit seem really decent. This whole thing dangles by a thread...if it wasn't for Piper and some good rubber mask work, it would be complete pants.

This is a strange and somewhat ridiculous sci-fi action comedy movie. But I enjoyed it. It was more comedy than anything else, but had good elements of sci-fi and action. Could totally be a cult movies, folks...

After a nuclear apocalypse Sam Hell, one of the few remaining fertile men on earth, goes into a town ruled by mutant frogs to rescue a harem of fertile women. If you are a 13-year old boy, this is the awesomest movie ever. Otherwise, it's got enough camp value to at least keep you watching.

A truly silly and fun post-apocalyptic western with Roddy Piper. I remember a saloon full of people wearing frog masks. It had a lot of hype with my high school class and SuperChannel free movie weekends of the past, and is a good example of cheapass sci-fi of the late 80's, if you're into that sorta flashback trip.