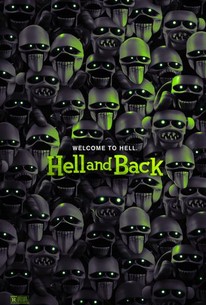 Remy, Augie and Curt have been best friends since birth. When they jokingly take a blood oath and break it, Curt is dragged to Hell to be sacrificed. The guys must risk everything to save their friend from a slew of misfit demons, Greek legends, and the Devil himself. Are they prepared? No, absolutely not. (C) Freestyle Releasing

Susan Sarandon
as Barb the Angel

Bob Odenkirk
as The Devil

H. Jon Benjamin
as The Tree

Michael Peña
as Abigor the Demon

Dennis Gubbins
as Larry the Demon

Kyle Kinane
as Kyle the Demon

David Koechner
as Asmodeus the Demon

Kumail Nanjiani
as Dave the Demon

Brian Posehn
as Cleb the Carny

Greg Proops
as Asmoday the Demon

Paul Scheer
as Paul the Demon

JB Smoove
as Sal the Demon

Dana Snyder
as Garthog the Demon

News & Interviews for Hell & Back

View All Hell & Back News

Critic Reviews for Hell & Back

Emerges with not one single laugh.

A script like this should be destroyed upon receipt.

Hell and Back is a far cry from something you would sell your soul for.

It's a wonder how this stinker of a script -- packed with foul language, sex references, and scatological jokes -- attracted such a strong cast in the first place, and the finished film is no better.

Hell And Back may be for adults, but it is not very mature. Everything from drug use to rape is lampooned in this outrageous, R-rated comedy.

Audience Reviews for Hell & Back

Incredibly vulgar and crass, Hell & Back is a wicked animated comedy. While fooling around with a book of black magic three friends open up a portal to Hell, and when one of them gets sucked in the other two follow in order to rescue him. Featuring the voice talents of T.J. Miller, Danny McBride, and Mila Kunis, the cast is fairly decent. And the animation is pretty good, and includes some interesting set and character designs for Hell. However, the humor is extremely raunchy and never lets up. Hell & Back delivers some laughs, but the level of crudeness can be hard to handle.

Stoners go to hell to face the dread demon overlord and in the meantime discover the meaning of true friendship. At least that's what I think they were going for. Some of it works. But not all of it. Danny McBride gets the best lines.