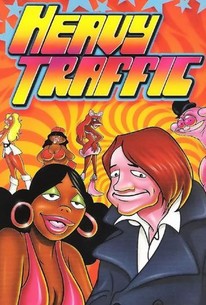 Heavy Traffic represents a follow-up to animator Ralph Bakshi's first feature film, Fritz the Cat (1972). The central character is Michael, the ingenuous son of an Italian father and Jewish mother. An aspiring cartoonist, Michael leaves home in a huff and outrages his family by conducting an affair with an African-American woman. Heavy Traffic was originally intended to be a cartoon adaptation of Hubert Selby's notorious novel Last Exit to Brooklyn, but negotiations fell through, and Bakshi was obliged to cook up a similar but not identical "mean streets" plotline. (Last Exit to Brooklyn was made as a live-action film in 1989.)

Heavy Traffic not only has an authentic tenement toughness but the rough feeling of unassimilated autobiography, of experiences and fantasies still keenly felt.

There's something to offend everyone in this melange of crudely conceived, amateurishly animated stuff.

The quality of the animation is cornflake packet standard, the script -- one or two minor moments excepted -- a disaster.

A cruel, funny, heartbreaking love note to a city kept alive by its freaks, and always, always dying.

Bakshi manages to offend nearly everyone from transvestites to mafiosi; but the comic distancing achieved by his army of animators manages to bring off a most difficult kind of humor: the humor of pain and despair.

Heavy Traffic may be a bit dated in terms of its distinct '70s tone, but that doesn't make it any less fascinating. If you're a fan of the animation genre, this certainly qualifies as essential viewing.

It's a downbeat, dark fantasia of urban life from a filmmaker trying to understand the darkness of the moment before it slipped away.

Filled with autobiographical resonance and razor-edged humor, this is a cynical portrait of one young man's coming of age.

A zesty abstract-jazz riff of a film.

One of Bakshi's most brazen and bizarrely entertaining.

The life of an unemployed underground cartoonist who lives with his shrewish mother and mobbed-up dad and lusts after a saucy Nubian bartender, told in a mixture of animation and live action (sometimes in the same frame). It's successful as a series of visual experiments, but there's not much of a story and what there is gets needlessly nasty (the only likable character turns into a pimp who pulverizes johns with a steel pipe).

To me, there's always been the Ralph Bakshi movie that everybody has seen (The Lord of the Rings) and then there are the rest that nobody has seen. Heavy Traffic is one of them, along with Coonskin and Fritz the Cat. These films are definitely not for everybody, but if you have a little bit of taste and perhaps an open mind, then you may just enjoy this trip. It's a very cerebral kind of movie, with a lot of visuals that you either get or don't get. The film also has a nice story to it: two people stuck in a ghetto looking for a way out. Along the way, they run into every kind of obstacle while we see it as nothing more than a game on a pinball machine. I know that's not a great description, but trying to describe this film is like trying to describe the color red. It has racism, sexuality and just true-to-life things going on in it. This definitely isn't a kids film, and Bakshi never intended it to be. It shocks me that these films ever got made in the first place, but I'm thrilled that they did. Oh, I'm still very curious about what was taken out of the X rated version of it.

A great animated film from Bakshi. It combines cartoon and live action actually. Plus, the story is really good, in that 70s realistic gritty style. I really liked it.

This film doesn't have the same cohesiveness or power as Bakshi's later work, Coonskin, but it's still an impressive vision. The influence of Selby Jr. is really visible here, in the style of language and the environment. Horrifying, surreal, surprising, and wholly entertaining. I'll take Ralph Bakshi's challenging, adult animated movies over fluff like Pixar's Up any day.