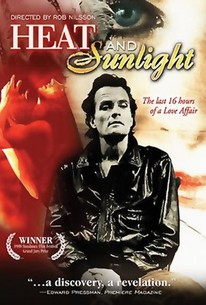 Rob Nilsson both directed and starred in Heat and Sunlight. Nilsson plays a San Francisco photographer who has trouble curbing his obsessions. He falls in love with dancer Consuelo Faust, then is unable to shake off his violently jealous impulses when the ardor cools. The musical score by David Byrne and Brian Eno successfully conveys the seismic disturbances in Nilsson's troubled psyche. The film itself lacks cohesiveness, though the individual sequences are for the most part worthwhile. Heat and Sunlight has enough exposed skin and profanity to fully warrant its R rating.

Richard A. Rohleder
as Salesman

Lester Cohen
as Salesman
View All

Critic Reviews for Heat and Sunlight

An agonizing low-budget improvised indie about a bunch of neurotics going ape over a relationship split.

Audience Reviews for Heat and Sunlight

There are no featured audience reviews yet. Click the link below to see what others say about Heat and Sunlight!