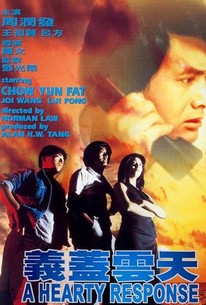 A tough detective fights for the freedom of an illegal immigrant in this action-packed Hong Kong thriller starring Chow Yun Fat. When Detective Bond accidentally harms an illegal immigrant named San during a routine police operation, his guilty conscience prompts him to invite her back to his home so that she may safely recover. Unfortunately Detective Bond's benevolent generosity is soon compromised by the simmering jealousy of his wife - who immediately assumes that her husband is having an extramarital affair with San. Later, when San is abducted and raped by a ruthless villain who attempts to extract a tidy ransom for her return, Detective Bond travels to the psychopath's hideout and single-handedly takes on his entire gang. After subsequently realizing that they were indeed meant for one another, Detective Bond and San are forced to go their separate ways.

Wong Wan-Si
as Wan
View All

Critic Reviews for A Hearty Response

There are no critic reviews yet for A Hearty Response. Keep checking Rotten Tomatoes for updates!

There are no featured reviews for A Hearty Response at this time.