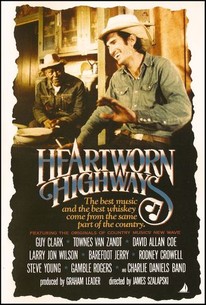 In this performance documentary highlighting several Country and Western music artists, the director James Szalapski has decided to let the music speak for itself, eschewing narration and interviews. A little comic relief is provided by a rambling, humorous introduction to a song sung by Gamble Rogers, and there are some down-home shots of the folks in Wigwam Tavern in Nashville. Many of the singers are entertaining in their own right, and there are interesting segments, such as one sequence in the Tennessee State Prison during a performance by David Allan Coe. Although filmed in 1976, the documentary was not released until 1981.

Shot in 1975 but not released until 1981, this documentary by James Szalapski captures the nascent stages of a poetic country music played by Texas outsiders like Guy Clark, Steve Young, Townes Van Zandt, and a young Steve Earle.

There are no featured audience reviews yet. Click the link below to see what others say about Heartworn Highways!