Hearts of Darkness: A Filmmaker's Apocalypse (1991) 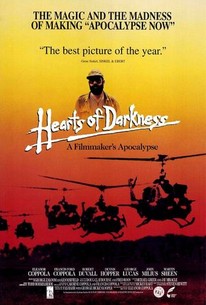 Critics Consensus: Chronicling the filming of Apocalypse Now through Eleanor Coppola's empathetic and frank point of view, Hearts of Darkness is a revelatory investigation of moviemaking and how creative obsession can impact an artist's family.

Critics Consensus: Chronicling the filming of Apocalypse Now through Eleanor Coppola's empathetic and frank point of view, Hearts of Darkness is a revelatory investigation of moviemaking and how creative obsession can impact an artist's family.

Critic Consensus: Chronicling the filming of Apocalypse Now through Eleanor Coppola's empathetic and frank point of view, Hearts of Darkness is a revelatory investigation of moviemaking and how creative obsession can impact an artist's family.

An intimate look at the making of Francis Ford Coppola's 1979 classic Apocalypse Now, Hearts of Darkness: A Filmmaker's Apocalypse combines the usual documentary interviews with outtakes from the film and rare documentary footage, some shot on the set by Eleanor Coppola. Not long after the arrival of Francis Ford Coppola and crew in the Philippines, the shooting schedule begins spiraling out of control; the film's cost has soon far surpassed the original budget, with the ending still unwritten. As the problems mount, from lead Martin Sheen's heart attack to the disappearance of several helicopters needed for a scene (because they went to fight in a nearby war), the making of the film begins to frighteningly resemble its subject -- an unending tale of madness and obsession in the jungle. The film provides a remarkably immediate look at the filmmaking process and the personalities involved, especially Coppola, who publicly acts the autocrat but privately proclaims his belief that he is making an awful film, and Marlon Brando, whose rambling, mumbled improvisations are among the documentary's highlights. Even more impressively, the documentary explores how, despite the chaotic environment, the filmmakers somehow managed to produce an acclaimed, lasting work of art.

News & Interviews for Hearts of Darkness: A Filmmaker's Apocalypse

RT on DVD: Live Free or Hairspray This Thanksgiving

View All Hearts of Darkness: A Filmmaker's Apocalypse News

Critic Reviews for Hearts of Darkness: A Filmmaker's Apocalypse

A fascinating 1991 postmortem on the making of Francis Coppola's Apocalypse Now.

At once anecdotal and revealing, this excellent film both illuminates the catastrophes that beset one particular project, and shows, by way of comparison, exactly what American film has foregone since the '70s.

There have been few sharper portraits of the film maker as alchemist than Hearts of Darkness: A Film Maker's Apocalypse.

As the portrait of an artist in crisis, Hearts of Darkness is unparalleled.

Harrowing and funny, a fine film on its own, Hearts leaves us with a new appreciation for the Vietnam War epic it documents.

The making of a film has never been documented with more penetration and truth than in Hearts of Darkness: A Filmmaker's Apocalypse.

For a portrait of cinematic obsession and unbridled megalomania... one would be hard pressed to find a more satisfying piece of work than Hearts of Darkness

It does a good job of painting an honest portrait of out-of-control egos and the excess of Hollywood in the '70s, while also being informative and entertaining.

There is something very carnal about watching the production fall apart and see the reputation of Coppola hang in the balance.

We come away from the documentary with a profound admiration for Coppola, if only because he didn't kill himself or someone else.

This is an interesting docu but some important issues are missing, such as Coppola's infidelity during the shoot and the question of whether or not the chaos on the set had bearing on the artistic quality of Apocalypse Now, acknowledged as a masterpiece

A phenomenal documentary about one of the most notorious film shoots of all time.

Audience Reviews for Hearts of Darkness: A Filmmaker's Apocalypse

Some have actually said that this film is better than its subject "Apocalypse Now," a sentiment that I definitely can understand but disagree with. If you see the aforementioned film, then you have to see this gem of a documentary. The footage is from director Francis Ford Coppola's wife, Eleanor Coppola, and the interviews from years later are by Hickenlooper and Bahr. What emerges onscreen is the story of a frustrated and self-hating director trying to make a masterpiece out of the Joseph Conrad novel "Heart of Darkness" centered on the conflict during Vietnam War. Read more at http://www.bluefairyblog.com/new-blog-1/2015/3/18/double-feature-lost-soul-the-doomed-journey-of-richard-stanleys-island-of-dr-moreau-and-hearts-of-darkness

The documentary "Hearts of Darkness" is fascinating not just as a behind-the-scenes look at a masterful film, but as a deeply relatable and fairly profound statement about creative ambition and insanity (and the fine line between the two). After all, it shows firsthand that even the guy responsible for "The Godfather" is nothing more than a fragile, yet hopeful individual (just like the rest of us).

Hearts of Darkness is a monumental documentary about the making of Apocalypse Now. With this film, we get to see the making of this epic war film, and the chaos it took to create such a monumental cinematic achievement. With in depth behind the scenes footage, the film gives the viewer the real story about this stunning work, and how hard it was for director Francis Ford Coppola. The film boasts interviews with everyone involved with the project. I feel that this is among the best documentaries ever made and it is a definite must see for fans of Apocalypse Now. Watching this film you get a sense of the dedication that Coppola had in making this ambitious film. Hearts of Darkness is an enthralling picture that is brilliant, fascinating and above all intense. This is a journey into a chaotic filmmaking experience that is brilliantly captured. Each person from the actors to the filmmakers gives their insight into the massive project. Coppola faced some serious obstacles in making Apocalypse Now, he financed the film with his own money, the project extended beyond the original shooting schedule and lead actor Martin Sheen suffered a heart attack on set. Coppola was faced with great doubt whether he was making a good picture or not. Throughout the shooting schedule, Coppola would go through great risk, almost to the point where his sanity was tested. The end result was not only a great film, but a standout piece of classic cinema. Hearts of Darkness is a terrific film that really plunges the viewer into the action of what it was like to make this cinematic classic. This is a documentary that is just as good as the film it documents. Another aspect of the film is that it shows the dedication that Coppola has to his craft, the dedication he has to make something unforgettable to watch. Apocalypse Now payed off for him and Hearts of Darkness is an exploration in how far filmmakers will go to convey his vision on celluloid.

All the more amazing for the fact that it's real. Full review later.