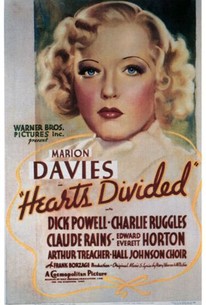 A remake of 1928's Glorious Betsy (itself based on a stage play by Rida Johnson Young), Hearts Divided is based, believe it or not, on a true story. Marion Davies stars as 19th-century Baltimore belle Betsy Patterson, who falls in love with Jerome Bonaparte (Dick Powell) -- the younger brother of Napoleon Bonaparte (Claude Rains) himself. Though in real life Betsy and Jerome were married, for the purposes of the film they are parted before the nuptials, as part of Napoleon's long-range plans to place a Bonaparte at the head of every European nation. The Richard Rodgers-Lorenz Hart musical score emphasizes the artificiality of the whole endeavor, which despite its basis in fact is never believable for a single moment. The film's brevity (70 minutes) is its principal redeeming factor. ~ Hal Erickson, Rovi

Philip Hurlic
as Pippin
View All

The ending does not affect the three reasons for seeing the film. These reasons are named Charlie Ruggles, Arthur Treacher and Edward Everett Horton.

There are no featured reviews for Hearts Divided at this time.