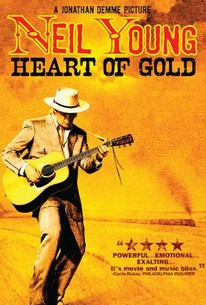 Critics Consensus: Proving that it's neither better to burn out nor fade away, Neil Young: Heart of Gold works both as a concert film and a meditation on mortality.

Critics Consensus: Proving that it's neither better to burn out nor fade away, Neil Young: Heart of Gold works both as a concert film and a meditation on mortality.

Critic Consensus: Proving that it's neither better to burn out nor fade away, Neil Young: Heart of Gold works both as a concert film and a meditation on mortality.

...Even those who haven't followed Young's every recent move could well find his performance here surprisingly captivating.

...Neil Young has experimented with film many times, but this is by far the most accessible cinematic treatment of his music; a troubadour at the top of his game.

The best moments in the film are when Ellen Kuras's camera just sits there taking in the whole stage, the whole gorgeous ecosystem.

It doesn't penetrate his craggy mystique, or make us hear his music in a new way. Instead, it's the same old choir song.

This Prairie Wind concert is one long sweet twang of wistful not-quite-regret.

Proves it's better to burn out, than to fade away.

Shows the famed songwriter's performance and work off with reverance, and a faithfullness to the live experience.

The result is simply spellbinding.

Young's presence, his heartfelt delivery, and the audience's fore-knowledge of his brain aneurysm add enough weight to make the film a surprisingly emotional experience

A potent brew of humanity, empathy, and dignity.

Jeffrey Chen
Window to the Movies
View All Critic Reviews (98)

In 2005, lauded musician Neil Young was diagnosed with a brain aneurysm. After getting this news, he wrote and recorded Prairie Wind- an album of ten sweet and folksy, but rough-hewn country rock songs that are both reflective on the past, but also look into the future. Shortly before he went in for surgery to correct the brain aneurysm, Young and his band, along with special guest Emmylou Harris, played a pair of concerts at the Ryman Auditorium in Nashville, Tennessee- the original home of the Grand Ole Opery. The concerts featured the Praire Wind album in its entirety, along with an encore set of older songs that had been previously recorded in Nashville. Filmmaker Jonathan Demme was there to document this event on camera, and this film, is the resulting compilation of the major highlights. It's very folksy, reflective, and full of sentimentality. Only one song features an electric guitar, but there's still a great deal of heart, soul, and hope to be found here. Peppered with some of Neil's dry humor and a few interviews at the beginning, this is an elegantly simple concert film that is quite enjoyable and really comforting. The great thing about Neil is that he's always been great at performing both folksy acoustic music and raw electric jams with great skill. All of what's featured here is the former, but, even though I tend to prefer his more 'grungy' electric stuff, sometimes nothing beats the lighter stuff. All of the musicians are at the top of their game, the Prairie Wind album is pretty decent, and the songs for the 'classics' set are well chosen, and have a few of my favorites like "Heart of Gold", "Harvest Moon", and "The Needle and the Damage Done", so that makes me happy. If you're a fan, you definitely dig it. If you're not a die hard, you might find it to be decent, and if you're a newcomer, this might not be the best place to start, but it probably couldn't hurt, either.

A fitting tribute to a great and still underappreciated artist. Demme succeeds where Young fails in his later Trunk Show film. Well rounded film that lets the music do the talking and what a story it tells.

Well shot and interesting, but the featured album (Prairie Wind) is kind of "same old Neil," and though listenable, the lyrics are kind of schlocky. As far as concert films go, though, this is something worth seeing - the Ryman auditorium is such an amazing venue.

[font=Century Gothic]"Neil Young: Heart of Gold" is a concert film capturing Neil Young and friends performing songs from his album "Prairie Wind", along with some of his older songs, at the Ryman Auditorium in Nashville in 2005. The movie as directed by Jonathan Demme places the emphasis where it belongs - squarely on the musicians, the audience never being shown.(I recall a critic praising Demme for using a similar technique in "Stop Making Sense." Now, there is a movie I have to see one of these days...) The empty auditorium is shown at the start and end of the film. There are perfunctory interviews in the beginning which set the scene(the new album, Neil Young's recovery from a brain aneurysm, etc.), mostly filmed in the back seat of cars which give the impression of there being little time to spare. The concert itself is wistful and contemplative, with Neil Young paying homage to times gone by, and people no longer alive, especially his father who had just died. Overall, he gives the impression of somebody at peace with himself.[/font]