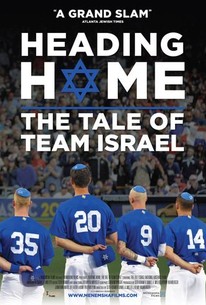 HEADING HOME: THE TALE OF TEAM ISRAEL is the David-and-Goliath story of Israel's national baseball team as it competes for the first time in the World Baseball Classic. After years of crushing defeats, Israel finally ranks among the world's best in 2017. Its roster includes many Jewish-American major leaguers, most with a tenuous relationship to Judaism, barely any ever having set foot in Israel. Their odyssey takes them from the Holy Land where they are hailed as modern-day Maccabees to the tournament in South Korea where they must debunk their reputations as has-beens and wannabes. The connection to Israel that the players forge pushes them to unexpected heights as they represent the country on the world stage.

Critic Reviews for Heading Home: The Tale of Team Israel

It's hard to imagine a true-life underdog tale more engaging than "Heading Home: The Tale of Team Israel," a winning David vs. Goliath baseball documentary that covers all the crowd-pleasing bases.

A messy hybrid that has some interesting and amusing moments but ultimately feels as inauthentic as the team it chronicles.

Slickly made and briskly paced.

If you like a good fairytale story, baseball or are Jewish (or more than one of these things) you will identify with Heading Home: The Tale of Team Israel.

The tale it tells is strange and weird in many ways, but there's no doubt that it's a great story (Living Life Fearless)

An unlikely miracle team tale that will win you over. Enjoy "The 'Oys of Summer."

It falls flat both journalistically and cinematically.

Heading Home is a film that will tell the legend of Team Israel for years to come.

Danielle Solzman
Solzy at the Movies
View All Critic Reviews (9)

There are no featured reviews for Heading Home: The Tale of Team Israel at this time.