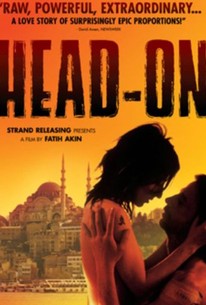 Critics Consensus: A raw, provocative drama about star-crossed love and the lives of immigrants caught between the traditional and modern.

Critics Consensus: A raw, provocative drama about star-crossed love and the lives of immigrants caught between the traditional and modern.

Critic Consensus: A raw, provocative drama about star-crossed love and the lives of immigrants caught between the traditional and modern.

40-year-old Cahit is brought to German psychiatric clinic after attempting suicide and sets out to start a new life, even as he longs for drugs and alcohol to numb his pain. Sibel is young, pretty and, like Cahit, Turkish-German. She lives a lifestyle that is a bit too wild for her devout, conservative Muslim family and fakes a suicide attempt to try and escape them. But the incident brings shame upon her family, who insist that only marriage can save her. Sibel begs Cahit to marry her and he reluctantly agrees, perhaps in an effort to save her and to find meaning in his own life. Initially the two share an apartment and little else as Sibel sees other men and Cahit continues to have flings with his on-again, off-again girlfriend. Gradually, however, Cahit begins to fall in love with Sibel and she, in turn, comes to realize that she loves him - but not before an incident of jealous violence tests this fledgling romance. When Cahit is sent to jail and Sibel flees to Turkey, her heart, mind and soul remain with him - but for how long?

Mehmet Kurtulus
as Huseyin
View All

A punky, noisy romance full of life and emotion and ideas that captures the moment in the style of contemporary classics such as My Beautiful Laundrette and Trainspotting.

That this marriage of convenience between two cultural misfits will eventually lead to love may sound like a contrivance, but that's not at all the way it plays. Akin's raw, powerful, multileveled movie takes us places we never expected to go.

Akin makes this a most intriguing, if roundabout, journey from despair to 'do something.'

The power of Akin's film, which is considerably aided by the two lead performances ... comes from the spectacle of people developing feelings for each other even through numbing layers of mutual narcissism, self-loathing and raging terror of intimacy.

Violent and sexy and funny and sad.

A riveting love story that never flinches from the unsettling reality of a specific social issue or the universal joys that two people can bring to each other's lives, no matter how hard they try to bring agony to their own.

From its stunning opening sequence to its merciless fatalistic conclusion, this is directed with extraordinary confidence and maturity by the 32-year-old Fatih Akin.

The storytelling rhythms can be a little jarring, almost like early Spike Lee, but this seems true to the disconnect of Cahit's and Sibel's lives.

Beyond its pleasures as a good piece of storytelling, Head-On also provides some interesting commentary on the clash between different cultures.

A gloomy fairy-tale version of a Hollywood romantic film that barely gets past its gloomy outlook on life.

Some people choose the hardest way to live/change.


"If you want to end your life, end it. You don't have to kill yourself to do that."