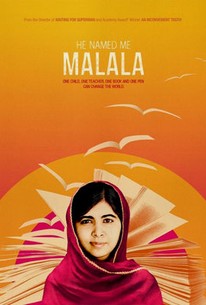 Critics Consensus: He Named Me Malala spotlights a worthy subject, but without the focus her story deserves.

Critics Consensus: He Named Me Malala spotlights a worthy subject, but without the focus her story deserves.

Critic Consensus: He Named Me Malala spotlights a worthy subject, but without the focus her story deserves.

He Named Me Malala Videos

He Named Me Malala Photos

HE NAMED ME MALALA is an intimate portrait of Malala Yousafzai, who was wounded when Taliban gunmen opened fire on her and her friends' school bus in Pakistan's Swat Valley. The then 15-year-old teenager, who had been targeted for speaking out on behalf of girls' education in her region of Swat Valley in Pakistan, was shot in the head, sparking international media outrage. An educational activist in Pakistan, Yousafzai has since emerged as a leading campaigner for the rights of children worldwide and in December 2014, became the youngest-ever Nobel Peace Prize Laureate. (C) Fox Searchlight

News & Interviews for He Named Me Malala

View All He Named Me Malala News

Critic Reviews for He Named Me Malala

It's a shame that Guggenheim's slickly produced documentary examines such an important and fascinating story with such underwhelming results.

The easy intimacy of the family dynamic is the film's big revelation.

This cagey documentary portrait fails to do justice to its inspiring subject, Malala Yousafzai.

Malala Yousafzai is a truly inspirational figure, a teenager who won the Nobel Peace Prize while still studying for her GCSEs in Birmingham, but she isn't especially well-served by Davis Guggenheim's reverential documentary about her.

The validity of her vital crusade - and by extension, the film's practically short-circuit appeal to your heart and gut - is tough to argue with.

Ultimately, this gentle documentary is less interested in the typical needs of drama and more in the patient, accepting demeanor of the remarkable young woman at its heart.

Even beyond Malala, there's plenty of interesting material to work with here, such as the inside explanation of the Taliban's appeal to the uneducated populations. But He Named Me Malala is simply unable to present it in a coherent fashion.

Malala is a unique, surprising individual, who's part of a larger history of standing up to oppression.

Malala is highly confident, well spoken yet cheeky, and the story is powerful and inspiring.

It's so disappointing to see [Malala] saddled with such a perfunctory, trite, and gushing tribute that barely scratches the surface of this remarkable woman.

A lengthy but fast-paced mixture of animated sequences, dramatised reconstructions, news and specially shot footage, He Named Me Malala is a well-made, easy to digest documentary-lite.

Audience Reviews for He Named Me Malala

With such an interesting story and topic, a real life heroine, this documentary falls a little flat. It fails to tackle the real questions about what happened and focuses on the same information we already know. It is still thought provokimg and Malala is very brave and an inspiration but it could have been better.

He Named Me Malala Quotes