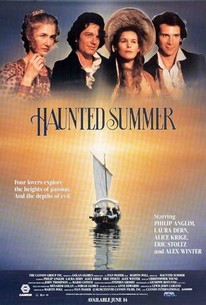 Adapted by Lewis John Carlino from the speculative novel by Anne Edwards, Haunted Summer recounts one of the most tempestuous "menage a quatres" of the 19th century. During an Italian holiday in 1816, novelist Mary Godwin (Alice Krige) meets the man she is destined to marry, bisexual poet Percy Byshe Shelley (Eric Stoltz). In so doing, Mary finds herself in emotional conflict with Shelley's possessive mentor Dr. Polidori (Alex Winter) and his fellow poet and erstwhile lover, the tortured Lord Byron (Philip Anglim). The erotic adventures that follow make the Gothic goings-on in Mary Shelley's subsequent novel Frankenstein seem like a day at the beach, though it is suggested that Frankenstein might never have happened had it not been for Mary's fateful "Summer of '16." Also figuring into the proceedings is one Claire Claremont, played by Laura Dern, who arguably delivers the film's best performance.

Terry Richards
as Fletcher
View All

Explores some of the dangers and a few of the pleasures of living in the ivory tower world of art.

There are no featured audience reviews yet. Click the link below to see what others say about Haunted Summer!