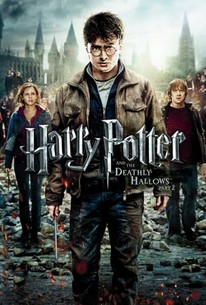 Harry Potter and the Deathly Hallows - Part 2, is the final adventure in the Harry Potter film series. The much-anticipated motion picture event is the second of two full-length parts. In the epic finale, the battle between the good and evil forces of the wizarding world escalates into an all-out war. The stakes have never been higher and no one is safe. But it is Harry Potter who may be called upon to make the ultimate sacrifice as he draws closer to the climactic showdown with Lord Voldemort. It all ends here. -- (C) Warner Bros

Leslie Phillips
as The Sorting Hat

News & Interviews for Harry Potter and the Deathly Hallows - Part 2

View All Harry Potter and the Deathly Hallows - Part 2 News

Critic Reviews for Harry Potter and the Deathly Hallows - Part 2

The final instalment, Deathly Hallows Part 2, is a bravura duel between good and evil. It's also a cathartic, occasionally clunky nostalgiafest.

For 10 years and eight films we've gotten to watch these young actors grow as people, as performers and as characters. It has been a true coming-of-age saga, in the fullest and most moving sense of the term.

The grand finish, if not always inspired, feels necessary. In a sustained, imaginative way, this is the best of any movie series.

Fiennes and Rickman get the actorly moments they've been building toward for so long, and the film is most fun when it sticks to mechanics: roller coaster rides, battle scenes, close calls.

For a grand finale to a truly epic, good-natured franchise, this is a perfect goodbye that's very hard to beat.

In the 10 years since Harry's first big- screen close-up, the spell has never been broken. And we Muggles have been made better for the magic.

An epic showdown in gorgeous 3D, packing an emotional punch, this cast and crew should take their final bow with pride before their devoted fans.

[The film] ends the series so beautifully, and shows such reverence for the books that inspired and affected them so deeply.

Yates strikes a pitch-perfect balance between rousing action, pathos, tenderness and even humor.

This final chapter of the beloved franchise is a satisfying end to the series, even if it falls short of the promise teased in its slightly superior predecessor.

It's true it is very different from the book... Nevertheless, I like this movie. I think it ends the series in a very satisfying way.

Audience Reviews for Harry Potter and the Deathly Hallows - Part 2

A solid, satisfying conclusion to the series even if a bit underwhelming, investing more in a desolate, melancholy tone than something more devastating and dramatic, and it has excellent performances, mainly Alan Rickman as one of the most complex characters of the series.

I really thought I wasn't going to love this upon second viewing. Nope, it's just as good as I remember it.

Ten years comes to a close in grand fashion. Two hours of stand up and cheer, break out the kleenex cries, and closure on a series of movies that captured a generation or six :) Easily the most action packed of the movies and in reality its just the final act of a very long movie. Watch part 1 before seeing part 2 just to make sure you have the set up all fresh in your heads. From Rickman to Fiennes to Carter to Smith to everyone inbetween everyone shines, not just the big names Radcliffe, Grint and Watson who once again prove that casting directors sometimes get things right. If anything the casting of the Harry Potter franchise get a lifetime achievement award. Spot on across the board. Deathly Hallows Part 2 was what we all wanted. From beginning to end we were given a ride that is for the fans of this series. If you are not, not sure whats wrong with you but move along. This is not a movie someone can just pick up and go along with, there is no emotional ties unless you have invested the time and energy into the entire series and than the payoff is magnificent. The Harry Potter films should go down in history as a masterpiece of storytelling.